They’re all alone, missing their kids, due to FMD

They’re all alone, missing their kids, due to FMD 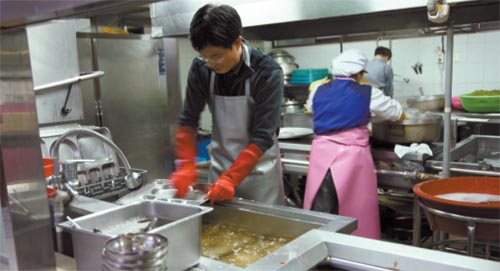 Employees at the National Institute of Animal Science wash dishes because only two kitchen staffers are there to prepare meals for more than 100 workers who have to quarantined for fear of spreading FMD. Provided by the institute


A road by the main gate of the National Institute of Animal Science (NIAS) in Suwon, Gyeonggi, was covered in white last Sunday - not by snow, but lime powder. It had been sprayed around the institute to disinfect the area against foot-and-mouth disease (FMD).

Shin Sook, 38, who works in the computer room at the institute, walked from the building toward a big steel gate where a JoongAng Ilbo reporter was waiting. That’s how far Shin is permitted to have contact with the outside world. And that includes the Lunar New Year holidays, too.

Shin, a mother of two young daughters, lives only three kilometers (1.8 miles) from the institute, but she has only been gazing in that direction for 28 days, unable to go home.

“From the office, I can see the windows of my apartment. If the lights are on, I think to myself that my kids are home and when the lights are out, I know that they have gone to bed,” said Shin.

All workers at the NIAS are banned from going home and have been staying at the institute since Jan. 3 because of fears that the workers could contaminate the institute with foot-and-mouth disease, which has led to the slaughter of millions of farm animals. All 129 workers have been sleeping on makeshift beds, making due with what they can.

When the workers first received an order that they were prohibited from commuting to and from work, they thought a week of confinement would be it. No one complained and they packed their things and came to work the next day.

“Everyone treasures all the animals here. We can’t let anything happen to any of them,” Shin said.

There are hundreds of priceless livestock at the NIAS, ranging from pigs that were genetically modified to help produce cures for hemophilia to cows used for cloning somatic cells. If the disease infects animals involved in projects that have been conducted for decades - with billions of won in investments - it could shake the foundation of the country’s biotechnology research to its core.

After the NIAS building became off-limits, the only things that have been allowed in are food for the workers and the livestock and oil to heat the facilities. The food is sterilized by infrared light before being carried into the building. And trucks carrying can only enter the grounds after being carefully sterilized.

Workers’ family members can only meet them at the steel gate. So, two weeks ago, when Shin’s daughters visited, she couldn’t even hug them.

Shin tried to explain the situation to her girls.

“The pigs that mom’s company raises are very precious. Mommy can’t go outside or hug you because these pigs might get infected with a dangerous disease,” Shin told her older daughter, a fourth grader, while her younger daughter, 7, cried loudly.

Life inside the building is trying. Shin said half of the workers caught a cold after sleeping on the floor with no heating. The air is cold and dry, with the only heat coming from radiators. Employees wash their hair and face in a basin and take turns using the few showers at the institute.

But still, Shin said, the conditions are bearable. The unbearable part is being unable to see her daughters. On Jan. 20, Shin spent the whole day sitting absentmindedly at her desk. It was her younger daughter’s elementary school orientation day.

Although Shin is a working mother, she wanted to be the one holding her little girl’s hand, looking around the daughter’s new school, meeting new friends and teachers. She wanted to teach her daughter what schools are like, how to make friends and how to behave in front of teachers.

Shin wasn’t the only parent stuck inside the building, worried sick about her children. One of Shin’s colleagues has a 15-month-old baby, and another has no family to look after her children.