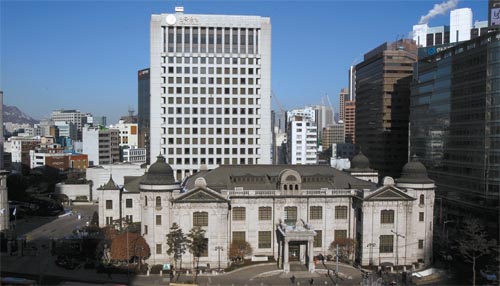 The former home of the central bank of Korea on Namdaemun Street in Jung District, central Seoul, now houses the Bank of Korea Museum. The tall white building behind the museum is the current home of Bank of Korea. By Shin Dong-yeon


Across from Shinsegae Department Store near Myeong-dong in central Seoul, a two-story stone building inspired by Renaissance-style chateaus stands out magnificently among the shiny skyscrapers around it. This historic building that now houses the Bank of Korea Museum is a century-old landmark in the country’s capital.

The classic structure rests in the shadow of the towering Bank of Korea high rise, which was completed in 1987 to be the new home of the central bank.

Although Namdaemun Street, where the museum sits, surrendered its “financial hub of Korea” status to Yeouido, this was long the hub of finance on the Korean Peninsula.

The building was completed in 1912 to become the headquarters for the Bank of Joseon, Korea’s central bank during Japan’s colonial occupation.

It was designed by renowned Japanese architect Tatsuno Kingo, also known for his work on the Tokyo’s Bank of Japan building and Tokyo Station.

Only since 2001 has it been the Bank of Korea Museum.

Most of its visitors are children and students. There is also the occasional foreign tourist that wonders in from the Myeong-dong market across the street. 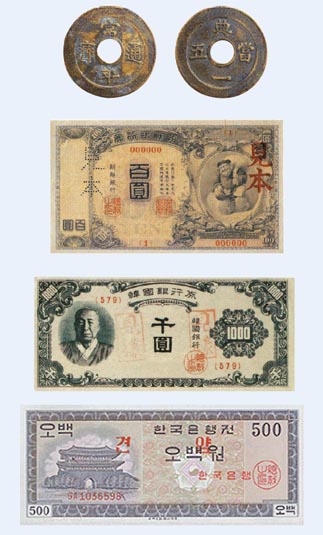 A popular exhibition is a collection of bills and coins that were used on the Korean Peninsula hundreds of years ago.

A coin known as dangbaekjeon, which was in circulation during Heungsun Daewongun’s reign (1820-1898), is a metaphor for a lack of money. The Korean idiom “I don’t even have a ddangjeon” came from this period of financial hardship and high inflation. Ddangjeon is a shortened term for dangbaekjeon.

“People just tried to make a living. I think that’s what we got from the chaos we experienced in ... our recent history,” said 71-year-old Jo Byeong-su, who used to design bills at Korea Minting and Security Printing Corporation.

“Currency design should transcend [financial history] down to several generations,” he added.

Also on display are foreign currencies from 120 countries.

But the real estate the building occupies also has deep financial history.

The museum is located near Seonhyecheong (1608-1894), which was a government office and warehouse that effectively controlled the prices of rice and cloth, and the value of the currency by periodically increasing supply of commodities.

A monument called Hamabi stands to the right of the current bank building’s east gate.

Hamabi was was erected during Joseon King Injo’s reign (1623-1649). In the era of Injo, a coin known as sangpyeongtongbo was the longest-circulated coin in Joseon history. 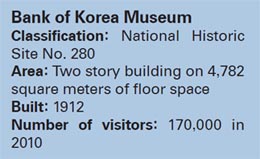 The Bank of Joseon was responsible for regulating prices, issuing currency and supporting international trade for domestic companies.

After the Japanese occupation of the peninsula came to an abrupt end in 1945, the bank was dissolved by allied forces and replaced by the newly created Bank of Korea.

Only two weeks after the remodeled Bank of Korea came to life, the Korean War (1950-1953) broke out. And two days after that - on June 27 - employees at the Bank of Korea transported 1,070 kilograms (2,359 pounds) of gold and 2,513 kilograms of silver to the Navy Control Area in Jinhae, South Gyeongsang, before eventually being moved to the United States’ Federal Reserve Bank of New York for safe keeping.

The mission of the modern-day central bank is inscribed into the wall of its main lobby: “stabilized commodity prices.”

The Bank of Korea controls the base interest rate and supervises the country’s foreign exchange reserves - which now totals close to $300 billion.

Korea ranks No. 6 in the world for its stockpile of foreign exchange currencies.

“As a joke, employees at the Korean central bank say they need not be blinded by money,” said Cha Hyun-jin, a 49-year-old manager at the bank’s investigation department.

“The BOK is the only bank that does not strive to make a profit. From the beginning of the bank’s establishment in 1950, it had been designated as a public corporation, exempt from paying corporate taxes.

“It was also off limits to tax auditors. But that all changed in 1998; now, it is classified as a general taxed corporation, which can be subject to tax audits.”

Cha added that the profit model is reversed for the central bank when compared with most private corporations because it generally realizes profits when the Korean won appreciates in value and falls when demand wanes for the currency.

Every year, the amount of currency that ends its life cycle could fill up 194 five ton trucks.