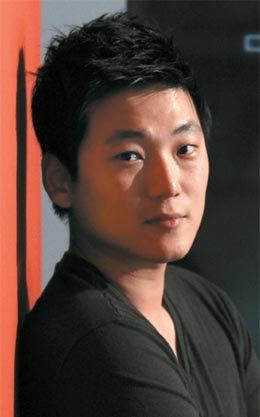 LOS ANGELES - Having firmly established himself in the growing concept-design industry, artist and illustrator Steve (Woo-min) Jung has his sights set on educating the younger generation of talented Koreans to enter his industry.

The 32-year-old naturalized United States citizen who made his home in Los Angeles, has worked on some of the most popular films with computer graphics in recent years.

Concept designers are like visual planners. Their job is to take the imagination of directors or script writers and bring them to life. Concept designers not only design characters, but they also work on the films’ backdrops and design movie sets and characters.

It’s still a relatively new occupation but has already been selected among the 50 Best Careers of 2011 by the U.S. News and World Report.

Jung most recently worked on “Transformers: Revenge of the Fallen” and “Tron Legacy,” a sequel to “Tron” (1982), which was released in North America and Korea late last year. Jung helped design characters and worked on the “club” set and other action scenes in the film.

Jung graduated in April 2003 from the Pasadena Art Center College of Design with a Bachelor of Fine Arts in illustration with a focus on entertainment design. He spent the first two years designing characters and environments for video games. He then moved on to work on feature animations before getting involved in feature films.

Q. Not too many people are familiar with what you actually do. Can you fill us in?

A. I’ll give you an example. In the film “Transformers: Revenge of the Fallen,” there is a scene in which an Audi R8 robot called Sideways enters an apartment in Shanghai.

I don’t know if you recall the scene, but there is a man eating jjajangmyeon (noodles in black bean sauce). I drew up the scene based on the script I read and then they were incorporated into the film. I was surprised when I saw the film because the man eating the noodles had a very close resemblance to the character I drew in the early phases of the filmmaking process.

Concept designers work in the early phases of the filmmaking process. It can take anywhere from six to nine months for concept designers to complete their work. There are some instances in which we start working on ideas with a director even before a script is completed.

It’s important for us to have a firm understanding of the director’s intentions before we start drawing. We also pitch our own ideas to the director. It’s therefore imperative for concept designers to be creative and skilled artists.

You participated in “Transformers: Revenge of the Fallen” and have gone onto work on other big budget films. How did that come about?

Ben Proctor, the lead robot illustrator for “Transformers,” was selected to work on “Tron Legacy” and recommended me to the director. Like in any other industry, having good connections is very important in Hollywood. If you work on a film together and it proves to be a box office hit, then there’s a good chance you’ll find yourself as part of the same team for the following film.

Proctor is a well-respected expert in this field and previously worked on other hits like “Avatar.” 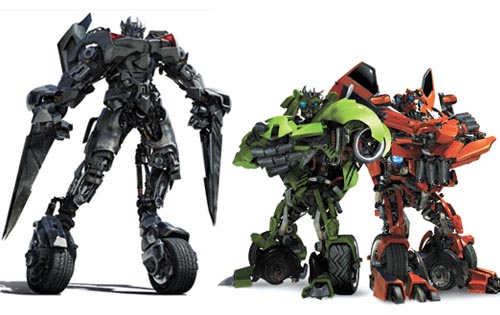 Sideswipe, Skidz and Mudflaps from “Transformers: Revenge of the Fallen”


What kind of work did you do for “Transformers: Revenge of the Fallen?”

I designed the robot characters Skids and Mudflaps based on the Chevrolet vehicles Beat and Trax. I also worked on Sideswipe, a robot based on a Corvette concept car, as well as Ravage, a cat-like character fired from submarines.

How do you usually conduct your work?

Working in Hollywood, we’re often afforded a lot of freedom. I joined the “Tron Legacy” team toward the end of 2008 and worked on the project through the first half of the following year.

It was tough work considering it was a sequel to the 1982 original and something we could not create from scratch. We needed to create something that was ours by imitating aspects of the original and we also felt a big burden with increased anticipation from fans.

When did you decide you wanted to become a concept designer?

I majored in illustration at the Pasadena Art Center College of Design and worked at video game developer Sega upon graduation. I then worked at Image Service, an animation film company, before moving onto the film industry.

But I started out as an economics major. I wanted to study art, but my parents strongly disapproved. However, I was able to change my major after convincing my parents at the age of 21. In the end, I realized that if you look for an area in which you show talent and challenge yourself, it leads to good results.

Are your parents supportive of your career now?

I guess they’re proud of me. I recently asked my parents why they had been dead-set against my decision to take up art. They just told me they don’t remember doing that.

Are you currently working on other projects?

I’m also set to work on three other films: “Oblivion,” “World War Z” and “Bakugan.” If I get an offer to work on another project in the middle of working on a film, I have no other choice but to turn it down. The most notable cases are “Inception” and “Iron Man.”

You have made a name for yourself but are also focused on nurturing and developing prospective concept designers. What do you hope to achieve?

Through such efforts, I hope to contribute to an increase in Korean concept designers. The industry has a bright future and it also pays well. It starts with a competitive starting salary and you can earn hundreds of thousands dollars when you get recognized for your work.

I strongly recommend this field to those who are interested and show promise.

With such a hectic schedule, when do you find the time for self-development?

Teaching students actually allows me to learn at the same time. Teaching helps me think of fresh ideas and I also get to strengthen areas which need improvement. In other words, it’s an ideal situation. I also spend a lot of time drawing sketches. I watch a lot of documentaries and films to get my imagination going and use it to improve my drawings. Including the work I do for films, I spend at least 10 to 12 hours (a day) drawing images on my computer. I guess it’s fair to say that excluding the time I spend on eating and sleeping, I spend nearly the entire day drawing.

A lot of people ask me what type of computer I use. I use a graphic-design-specific work station with a 38 inch monitor. It cost me $7,000.

Life consists of a series of infinite challenges. It’s my goal to start a design college of my own. I also want to try my hand at directing a film. I want to be recognized as a pioneer to help instill pride in younger Koreans interested in this field.