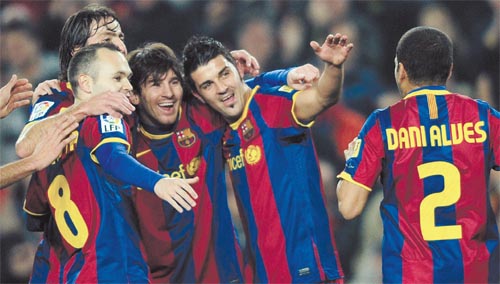 
BARCELONA, Spain - Barcelona earned a record 16th straight win in the Spanish league on Saturday by beating Atletico Madrid 3-0 with a Lionel Messi hat trick. The historic win provisionally lifted Barcelona 10 points clear of Real Madrid at the top of the La Liga table ahead of its fierce rival’s match against Real Sociedad on Sunday.

Messi decided the contest with two goals before the half-hour mark and added a third in the second half. Barcelona’s streak surpassed the 15 consecutive wins by Alfredo Di Stefano’s Real Madrid 50 years ago. Pep Guardiola’s team has outscored its opponents 60-6 during its 16-game run, the 10th longest in European history.

Atletico Madrid coach Quique Sanchez Flores left striker Diego Forlan out of the starting 11 and reinforced his midfield with former Barcelona youth-academy product Fran Merida, but the move did not pay off. Barcelona controlled the ball from the opening whistle and even though Atletico resisted, Messi broke through for the two-time defending champions in the 17th minute.

Messi cut back from the right flank across the edge of the area, leaving behind three defenders before firing a left-footer past goalkeeper David De Gea and into the right corner of the net. Messi’s second goal was a product of great team buildup. After Antonio Lopez touched it but could not clear, Pedro Rodriguez linked up with David Villa, who slipped the ball between two defenders for Messi to punch in.

With Forlan coming on after the restart, Atletico had a good beginning to the second half and Barcelona center back Gerard Pique saved a strike by Filipe Luis in the 53rd. De Gea swatted a Messi header over the crossbar in the 73rd, but six minutes later Messi pounced to tap in a ball that De Gea blocked but could not hold.

“We wouldn’t be where we are if it wasn’t for [Messi],” Guardiola said. “Without him we wouldn’t have won so comfortably. You always need to have players who can do something different. Real Madrid won 15 because they had Di Stefano. We have now won 16 because we have Messi.”

Flores was also full of praise for Messi.

“He is the best player I have seen - the Di Stefano of the 21st century,” Flores said. “It was an amazing performance from Barcelona. They have the capacity to hypnotize the opposition.”

Messi has 40 goals in 33 games in all competitions and his 24 league goals put him two ahead of Real Madrid’s Cristiano Ronaldo as Spain’s leading scorer.

With 167 goals for Barcelona in all competitions, Messi moved past Josep Escola (164) into sole possession of fourth place on the club’s career scoring list, trailing Cesar Rodriguez (235), Laszlo Kubala (196) and Josep Samitier (178).

Barcelona set a club record of 28 weeks without a loss earlier this season and stayed on pace to break a whole set of other records, including season points total, victories in a season, goals scored and fewest goals allowed.