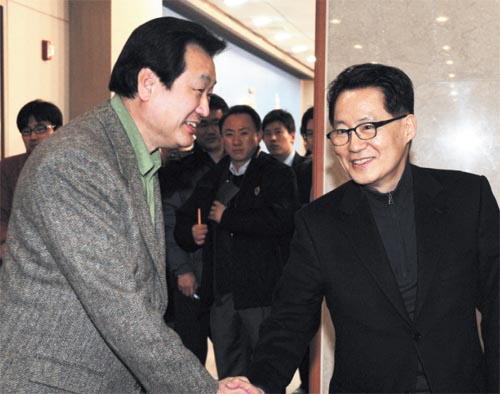 
Leaders of the ruling Grand National Party and the major opposition Democratic Party agreed yesterday to hold an extra parliamentary session this month, a move many political observers hope will put an end to two months of bipartisan strife caused by a battle over the country’s budget bill.

They also promised close cooperation to set up a meeting as early as this week between President Lee Myung-bak and DP Chairman Sohn Hak-kyu.

“The February National Assembly session should be successful in resolving pending issues regarding the livelihood of the people,” the two said in a joint statement.

Detailed procedural matters for legislation during the upcoming session will be decided today at a representatives’ meeting between the GNP and the DP, a source familiar with the situation said. But it is likely to follow the normal special-session process, in which parliamentary questions about ministries and government agencies are followed by standing-committee reviews of pending bills and a general vote.

More than 80 bills have been stalled since the GNP’s unilateral passage of the 2011 national budget on Dec. 8.

The bipartisan agreement to convene an extraordinary parliamentary session was reached after Lee said during a television interview on Feb. 1 that he would consider a meeting with the DP chairman to discuss pending issues.

Park said the two sides will try to hold the Lee-Sohn meeting as early as this week.

A high-ranking Blue House official told the JoongAng Ilbo, however, that this week is too soon for the meeting to be held.

“We will contact Sohn’s side after seeing whether or not the National Assembly normalizes,” the official said.

Political observers said public criticism toward parliamentary inactivity also motivated the two parties to reach an agreement. National Assembly Speaker Park Hee-tae from the GNP also plans to apologize for his party’s one-sided budget passage through a statement today. The DP had originally said an apology from the GNP was needed before convening a special session.