‘The bad guy’ spokeswoman of politics

‘The bad guy’ spokeswoman of politics 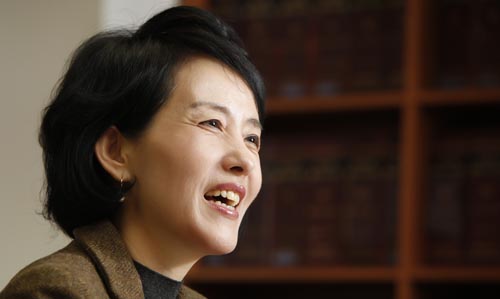 
“You have to play the antagonist,” said Park Sun-young of her occupation - being the spokeswoman of the conservative Liberty Forward Party, one of the smaller opposition parties in Korea.

Park has played the “bad-guy” for over 1,000 days, an unprecedented feat of longevity in the country’s tumultuous political tradition.

Park is well known for her fiery, straightforward remarks that hit too close to home for some.

Park has held her position for nearly three years.

She sat down recently with the Korea JoongAng Daily to discuss her tenure and give her take on current affairs.

Even though Park said, “I never wanted this for myself,” and says she had to be persuaded to take the post in 2008, she now feels it was her “destiny.”

Before her current position, Park spent more than a decade as a reporter for Korean broadcaster MBC after obtaining a law degree.

Her passion for law was clearly shown when she took up teaching university students after her career in television, which had made her a well-known face in Korean households.

Park says that her keen interest in law and regulations has enabled her to keep her commentaries and official reviews for the Liberty Forward Party strictly based on the books.

“My comments are standardized by the rules of the Constitution,” Park Sun-young said, adding that she accepted her position as spokeswoman to provide a “living education” for her students.

Her no-nonsense rhetoric on current issues based on strict standards has gained her notoriety, even with the president, as Park’s statements criticizing the Blue House and the Lee administration have been anything but mild.

“I’ve met President Lee Myung-bak three times [as spokeswoman],” she said, “and every time he shook my hand, he would say in front of everyone, ‘Go a little bit easier on me.’ ”

Korean politics, which often seem more of a battlefield - with fisticuffs, chains and hammers - have actually become “cleaner” during the time that Park has served as spokesperson, she said.

Despite the improvement, Park believes the entire political system needs to evolve more, with fewer electoral districts and changes inside and outside the National Assembly.

“I see many lawmakers receive criticism for not doing tasks that are really not their responsibility, because so many people demand legislators do the work that regional government servants should be handling,” Park said.

Park said this problem comes from the fact that there are too many electoral districts, forcing competing candidates to become involved in their districts too personally to concern themselves more with national affairs and laws.

Park said there are currently over 20 electoral districts in the Seoul region alone.

“We should cut down on electoral districts and select more people with expertise. How can someone who has knowledge limited to paving roads ever handle diplomatic affairs and trade?” Park wondered.

The spokeswoman also pointed out that internal conflict, which has more than often bled out into physical struggles between parties at the National Assembly, could be reduced if Korean politics are led by a multiparty system, like France.

“We should have a rainbow of political parties,” said Park. “In a multiparty system, everyone has to listen to each other in order not to collapse. There should be dialogue and compromise.”

Currently, the National Assembly is mainly led by the ruling Grand National Party and the main opposition Democratic Party.

There are few other parties, and even fewer independent legislators who do not belong to any parties.

Most of the minor opposition parties have short life spans and are always coming and going.

The Liberty Forward Party was founded in Feb. 2008 and has seven of 198 seats at the National Assembly.

However, the party has gained support because of the party’s president, well-known presidential candidate Lee Hoi-chang, and Park’s straightforward attitude that can be seen best in the country’s times of need.

Take, for instance, the foot-and-mouth disease (FMD) epidemic. “This is a people problem,” said Park Sun-young, referring to the FMD outbreak.

“Three trillion won ($2.7 billion) in losses from the disease and no one is paying any attention. Would this situation be happening if the outbreak had occurred in the Jeolla provinces?” she said, criticizing the main opposition party, which originates from that region.

As for inter-Korean issues, Park called for the government to step up its dealings with North Korea and improve the current frigid state of affairs on the Korean Peninsula.

“We lost 50 of our citizens to North Korea last year,” she said. “This is because [the government] doesn’t have a backbone. We should retain our self-respect as a sovereign country.”