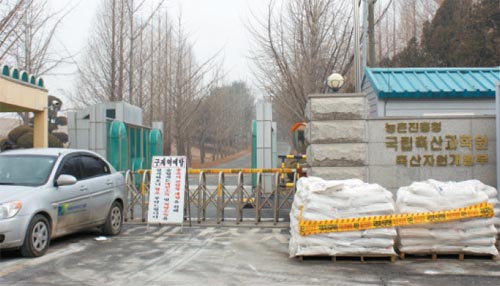 The Department of Animal Resources Development in South Chungcheong was closed off yesterday after 13 pigs were found to have FMD. [YONHAP]

The ministry said yesterday that the National Veterinary Research and Quarantine Service conducted an inspection Saturday on 13 pigs that at showed signs of FMD at the breeding farm. All 13 tested positive.

The South Chungcheong Provincial Office shut down the facility immediately after being told of the outbreak on Saturday and culled the pigs that day. The department said it vaccinated all of its animals in January.

An official at the Rural Development Administration, which runs the breeding farm, said, “We did our best to block the FMD virus by spraying disinfectant around the farm twice or three times every day and by thoroughly shutting off the farm from the outside world, so now we feel frustrated.”

The official added: “Although some pigs were infected with the FMD, we have completely vaccinated all animals. So we assume that roughly 80 percent of livestock in the breeding farm have formed antibodies to combat the disease by now.”

Established in 1915, the facility provides farmers with high-quality livestock sperm and poultry to help produce the quality meat for consumers.

The department has played a pivotal role in improving the country’s livestock breeds, according to department officials.

Each year, the department gives sperm from top-graded cows to the National Agricultural Cooperative Federation, which distributes it to farms nationwide.

The facility also gives sperm from pigs to a national insemination center and provides about 35,000 poultry to farms on an annual basis.

Each year, the department aids in the production of 500,000 pigs and 7 million poultry.

The department has kept all of its 115 staff members on campus since the first outbreak of FMD was reported in Andong, South Gyeongsang, on Nov. 29. It also has operated an emergency team around the clock and blocked all vehicles from entering the facility. All communication with outsiders has been done remotely and outside food has been prohibited.

Up until now, the highly contagious virus has swept all regions nationwide except South Jeolla and Jeju Island. Roughly 3.1 million animals have been slaughtered so far.