Free lunches to start in March, despite opposition

Free lunches to start in March, despite opposition 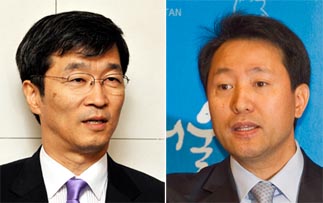 Under the plan mapped out by the Seoul Education Office last week, it will use 116.2 billion won ($104 million) to provide free lunches for schools in all 25 Seoul districts.

According to the plan devised by liberal education chief Kwak No-hyun, first to third-graders will receive the lunches, including four of the 25 districts whose education heads are supported by the Grand National Party, which opposes free lunches.

The education office said 21 of 25 district offices supported by the Democratic Party will provide free lunches for fourth-graders as well using their own budgets.

The DP controls the majority of the seats in the Seoul Metropolitan Council after they won a landslide victory in the June 2 local elections in 2010.

Oh maintains that Seoul does not need to provide free lunches for rich kids. Counter-punching free lunch, Oh announced in a press briefing last week that he will push ahead with the “three no’s” in education, including no violence, no private tutoring and no major expenses for school supplies, sending a clear message that he would not be subdued by what he called the DP’s and Seoul Education Office’s “populist moves.”

Seoul city government plans to spend 373.8 billion won to implement the “three no’s” in education, with a completion date of 2014.

This year, Oh will use 52.7 billion won to implement the “three no’s” in education by hiring 1,094 school guards in 547 elementary schools to prevent students from physical and sexual violence in addition to adding more CCTVs in school zones. In June, Kim Su-cheol, a 45-year-old repeat sex offender, who spent 15 years in prison for raping a woman in 1987, lured an 8-year-old girl from the playground of a Seoul elementary school in broad daylight and brutally raped her in his nearby home.

Part of the “three no’s” in education includes encouraging students to self-orientate study, and not rely on private education.

Oh said he will support 250 elementary, middle and high schools to run classes where students learn studying independently without relying on expensive private tutors. He wants to gradually increase the benefit to all Seoul schools by 2014. Oh said free school lunches could cause increased taxes and jeopardize the financial health of the Seoul city government.

In a related matter, the Seoul Metropolitan Government in January asked the Supreme Court to judge whether the passage of this year’s budget for free school meals was valid.

The lunch budget was created without consulting the GNP and Oh. The DP railroaded the passage of the bill by using force while the GNP councilors boycotted the vote.

Experts say it is unclear whether the Seoul Education Office’s free lunch program will go smoothly.