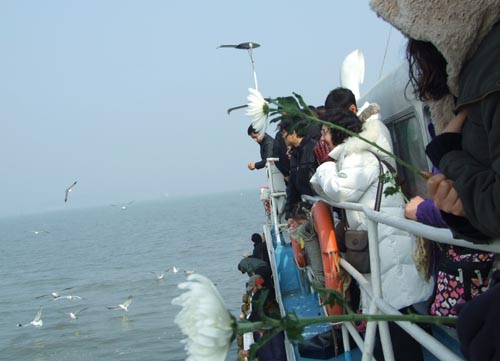 Passengers aboard the New World cruise ship express condolences for their deceased relatives Friday at sea off Incheon. As cremation ceremonies become more popular in Korea, more Koreans select holding a funeral at sea, where they can scatter the ashes and throw flowers into the water. By Choi Mo-ran


INCHEON - While most families were celebrating the Lunar New Year holidays, others were in a much more somber mood, attending memorials at sea, where they scattered the ashes of those they lost.

Most Koreans, accustomed to burying the body of their loved ones, are unfamiliar with the ceremony. But, as cremation has become more common in Korea, more and more are selecting a “sea funeral.”

Jeong I-yeong, 66, boarded a New World cruise ship Friday heading out to sea off Incheon, and spread the ashes of her husband who died three months ago. Fifty-seven other people were onboard the ship.

Jeong said her husband had asked her to scatter his ashes at sea before dying of lung cancer.

Currently, there is only one company, Hyundai Excursion, that handles burials at sea. The company sends a ship out at noon every Sunday. During the nine-day period of Lunar New Year and Chuseok, 24 ships, three or four times a day, sets out to sea. The ships travel on a designated route and is only in the coastal waters off Incheon.

“In 1999, some people [occasionally] asked me to lend a boat to scatter ashes at sea, so I came up with this idea,” said Kim Jin-man, president of the company. “Since we started the sea funerals in 2002, the ashes of about 7,000 people have been scattered.” Koreans living overseas also have embraced the idea and taken part in the sea burials.

“Although some people at first didn’t like the idea of scattering ashes at sea, more and more Koreans have become attracted to the idea,” Kim said. “And we allow people to scatter ashes at only two spots.”

Kim said the trip is an hour round-trip and the two buoys where the ship stops are eight kilometers (4.97 miles) from shore.

Once the ship arrives at the buoys, it sails around them twice, and blows its horns. The ship stops near the buoys for 20 minutes to give passengers time to mourn. While passengers throw flowers into the sea, a piano piece is played on the intercom.

“Considering that some people criticize the scattering of ashes could pollute the sea, we hold the funeral far away from fisheries,” Kim added.

The company said some Russian refugees and Chinese nationals in Korea also have had ashes scattered at sea close to their hometowns.