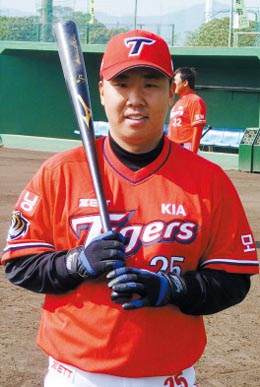 Third baseman Lee Bum-ho, who recently inked a deal with the Kia Tigers, said he is eager to contribute to a championship season with his new team.

The 30-year-old is currently training with his new teammates in Miyazaki, Japan, as part of the Tigers winter camp. Lee joined the camp a day after it was announced on Jan. 28 he had signed with the club. Lee had played with the Hanwha Eagles in Korea before signing a lucrative 500 million yen ($6 million) two-year deal last year with the Fukuoka SoftBank Hawks in the Nippon Professional Baseball league.

But with Lee struggling to find his place in the NPB, many speculated that he would return to Hanwha. Instead, he surprised the Korean baseball world by inking a one-year deal with Kia worth 1.2 billion won ($1.1 million).

“I don’t have any injuries and I feel good at this point,” said Lee. “I went through some basic training prior to joining the winter camp but I’ve yet to participate in full training.”

Lee, who has 160 home runs and 526 RBI over his 10-year KBO career, is not yet in top physical condition but figures to bolster an already imposing Tigers offense that features the likes of Kim Sang-hyun and Choi Hee-seop.

“Veteran players like Lee Jong-beom and Choi Hee-seop are giving me advice between training breaks,” said Lee. “It’s been a huge help. Lee returned to Korea after a stint in the NPB and he’s been sharing his personal experience. I already feel like a part of the family.”

Lee hasn’t had much luck over the course of his career when it comes to winning. He came up short during his days at Daegu High School and never came close to winning the Korean Series since joining the Hanwha Eagles in 2000. Naturally, Lee is eager for a shot at the Korean Series and hopes to help Kia to its 11th Korean Series win in the coming season.

“Kia signed me to win the Korean Series,” said Lee. “I am fully aware of that and I am willing to work hard to live up to the club’s and fans’ expectations. I think it’s because Kia is already a strong team capable of challenging for the title but I find that I’m pushing myself harder in training.”

Meanwhile, Hanwha received a list of players from Kia from which it can select one by Saturday as compensation for the deal. Hanwha had the rights to Lee, but because Lee signed with Kia, the Tigers must give up something in return.

Hanwha must decide on a compensation package that includes a player from the list and 990 million won or 1.48 billion won in cash without a player. Hanwha is expected to take the player plus cash to bolster its lineup.