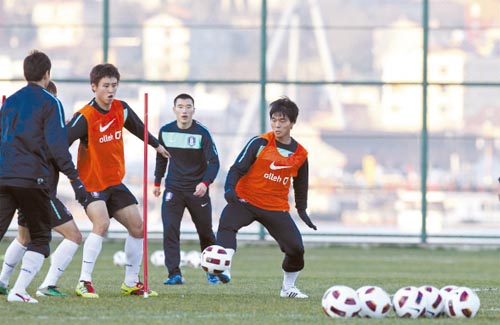 ISTANBUL - With the Asian Cup now in the rear-view mirror and the 2014 Brazil World Cup just three years away, the Korean national football team will start its full transition into relying more on its young talent in upcoming international friendly matches like the one against Turkey in Trabzon on Thursday at 3 a.m., Korean time.

The match will be Korea’s first since veterans Park Ji-sung and Lee Young-pyo retired from international play at the end of the 2011 Asian Cup last month.

Korea is currently in rebuilding mode, hoping to nurture young talent for the 2014 World Cup. Since taking over the national team in July 2010, manager Cho Kwang-rae has loaded the team’s roster with young and promising players like Son Heung-min of Hamburg SV and Ji Dong-won of the Chunnam Dragons, among others.

The average age of the 22-man roster for the friendly against Turkey is 24 and nearly half the players are based in overseas leagues. 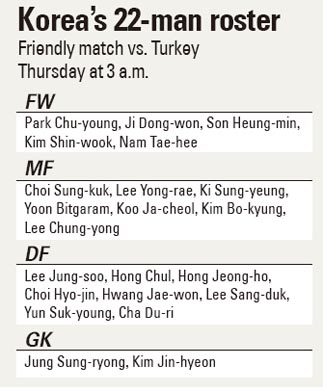 The biggest challenge for Cho will be filling the void left by Park. But Cho has already made his decision.

“I will use Koo Ja-cheol and Park Chu-young in the left wing and forward positions,” Cho told the press upon arriving Sunday at TAV Istanbul Ataturk Airport. “I will also test Kim Bo-kyung, but Koo and Park will be given priority since they have more experience on the national team.”

Cho called on Koo to fill in for the injured Park Chu-young at the 2011 Asian Cup and the versatile Koo responded with a breakout performance and led the tourney with five goals.

“The younger guys on the team need to show that we’re capable of leading the national team in place of the retired Park and Lee,” said Koo. “But I have no intention of filling the void left by Park. That is not important. Rather, I will have to work hard to show what I’m capable of doing on the field.”

Cho will also have to fill the left fullback position with the retirement of Lee Young-pyo.

“It will be difficult to immediately fill the void left by Lee Young-pyo but Hong Chul and Yoon Suk-young have played well for their respective teams,” said Cho. “I’m also considering the more experienced Kim Dong-jin but he has not played well of late so I’ve decided to test the two younger players first.”

Cho has also decided to try out first-time selection Nam Tae-hee of Valenciennes FC. The 19-year-old is versatile enough to play the midfield and forward positions.

“He’s playing in the French Ligue 1 at a young age and that tells you he’s a player with plenty of potential,” said Cho. “It will be my first time evaluating Nam in person. I’m expecting the type of positive impact Son Heung-min had on the national team from Nam.”

Turkey, on the other hand, is a team loaded with veteran players. Managed by Guus Hiddink, who led Korea to the semifinals at the 2002 Korea-Japan World Cup, Turkey is currently focused on preparing for the UEFA Euro 2012 tournament in Poland and Ukraine.