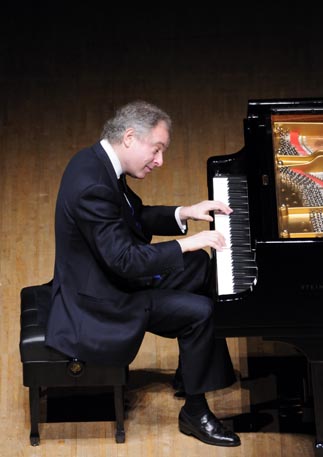 Andras Schiff will be back in Seoul on Feb. 23 to give his second-ever solo recital in Korea. He will perform at the Seoul Arts Center Concert Hall. Provided by Mast Media

Acclaimed pianist Andras Schiff returns to Seoul on Feb. 23 to give his second-ever solo recital here.

And with this concert, the Budapest-born British performer will play Beethoven’s last three sonatas - No. 30 to No. 32 - in chronological order without an intermission.

Schiff paid his first visit to Korea in February 2008, more than 30 years after his debut. It took domestic performance organizers a decade to pave the way for Schiff’s first recital here.

At the time, Schiff - known as a Bach consummator - performed Bach’s Italian Concerto in F major, BWV 971 and Beethoven’s Piano Sonata No. 21.

Pianist and music columnist Kim Ju-young picked Schiff’s concert as the performance of that year.

“Having reached a crest of the world, he still holds the spirit of novice,” the columnist noted.

Kim Hye-seong from Mast Media, an organizer of the upcoming performance, said, “Until 2008, Schiff had a slew of performances in Japan, but did not drop by Korea. But he realized the potential of the Korean classical music market during his first visit and noted his intention to come again.”

In 2004, Schiff launched a series of performances in Europe traversing the 32 Beethoven piano sonatas in their composition order. He then took his tour to North America in 2009.

The concerts before 2008 were recorded and released by record label ECM.

“Part of what makes Mr. Schiff’s Beethoven so engrossing is that his interpretive approach eludes definition,” said Tommasini.

The brilliant pianist displays a surprising sculpture of sound because “an artful blend of intuition and analysis has gone into his preparation” The New York Times review said.

Born in Hungary in 1953, the consummate pianist came to international prominence after winning the Tchaikovsky Competition in 1974.

Schiff also received two awards in recognition of his Beethoven Performances: he became an Honorary Member of the Beethoven House in Bonn, Germany, in June 2006, and in May 2007 he was presented with the renowned Italian Premio Franco Abbiati della critica musicale in tribute to his Beethoven sonata cycle.

In October 2007, Schiff was honored by the Royal Academy of Music with the institution’s prestigious Bach Prize - which is sponsored by the Kohn foundation - and for his outstanding contribution to the performance and scholarly study of Bach’s music.

But it’s not just Schiff who’s coming to Korea. Top-notch musicians have been filing into the country, demonstrating the growth of Korea’s classical music market.

Pianist Evgeny Kissin first visited Korea in 2006 - 22 years after his debut. The audience gave him a fervent response. Kissin came to Korea again in 2009 and was so popular that he played 10 encore pieces.

In November this year, Kissin is scheduled to return to Korea’s capital for the third time to stage Chopin’s Piano Concerto No. 1 in E minor.

Argentine pianist Martha Argerich was so overwhelmed by the Korean audience’s response when she made her first performance in Seoul in 2007 that she has now visited Korea every year.

Another recital is scheduled for 7:30 p.m. on Feb. 25 at the Daejeon Culture & Art Center Arts hall.