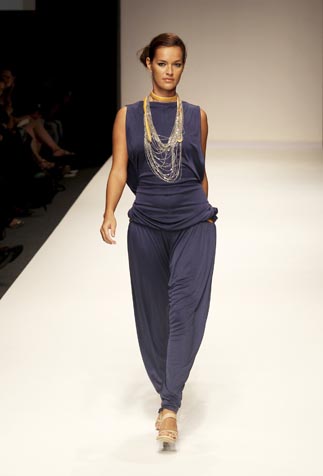 A model presents a creation by designer Amber Feroz during Dubai Fashion Week last October. Modesty and religion are the cornerstones of the fast-growing Islamic fashion industry, which is making a mark on runways from Indonesia and Dubai to Monte Carlo. [Reuters/Yonhap]

Statuesque models clad in black robes with strategically placed slits and headscarves boasting vibrant flashes of color sashay down a Dubai runway to the theme song for a James Bond movie.

For the Dubai-based designers of the Rouge Couture line on display, the Western music combined with the unusual twists on the traditional abaya worn by observant Muslim women is the perfect contrast that sums up Islamic fashion.

“Our designs are there, in part, to empower women and show that traditional Arab women are strong,” said Rouge Couture founder Sarah Madani at the show in October. “Our line is both traditional and religious, and no matter how far we go with it, our clothes are still modest.”

Modesty and religion are the cornerstones behind the fast-growing Islamic fashion industry, which is making a mark on runways from Indonesia and Dubai to Monte Carlo. Islamic fashion is part of a growing appetite for Sharia-related industries and assets, ranging from finance to halal food.

Some of the biggest names in couture, such as Christian Dior, are racing to produce Islamic-inspired attire that will tap into the spending power of Muslim women globally.

Muslim designers are also eager to find their place in a fashion industry that is conservatively estimated to be worth more than $96 billion globally.

But the industry has its detractors, who say Islamic fashion misses the spirit of Islam and exploits the faithful by producing attire that is labelled Islamic, but whose aesthetic appeal owes much more to Western ideals of beauty.

A fashion show in Monte Carlo last August - where the Malaysian prime minister’s wife was a patron - sparked protests from student groups and politicians in Malaysia as well as widespread criticism on the Internet.

Some designs featured at the Islamic Fashion Festival were reviled for portraying the Prophet Mohammed’s name in Arabic calligraphy on the chest of a sleeveless abaya-inspired gown.

“The pride of the entire Islamic community worldwide has been tarnished by the Islamic Fashion Festival,” one Malaysian parliamentarian said at the time.

A Facebook page was created calling for the Prime Minister’s wife, Rosmah Mansur, to apologize to Muslims.

But Islamic Fashion Festival founder Raja Rezza Shah said critics missed the point of the event, which brings together designers of all faiths to create clothes with consumers from the Muslim world in mind.

“My event is about showing the gentle side of Islam to a non-Muslim audience,” Shah said. “There will be mistakes made by some designers that do not have a deep knowledge of Islam. How can I show Islam is gentle if I chop a designer at the first mistake?”

Shaykha Halima Krausen, a German-born Sharia scholar, said there is always a concern that religion will be exploited for economic gain, but there were also opportunities to be had.

“Rather than looking for conflicting Western and Islamic values ... I would really like Muslims to be more creative themselves in order to revive their cultural wealth,” she said.

London-based designer Sarah Elenany said there have been some “bad choices” in Islamic fashion, in which designs have sought to be controversial.

“As a designer, you always have to be sensitive to issues surrounding religion,” she said, noting any mistakes were simply growing pains for an industry that is still in its infancy.

Her self-named brand, Elenany, features Western urban fashion such as long sleeved T-shirts, dresses and jackets that use prints from Islamic tradition, depicting such images as minarets and hands folded in prayer.

Elenany said her edgy designs are aimed at Muslims who want to celebrate the modesty of their Muslim identity but still blend in with Western society.

But not everyone is a fan of Islamic fashion with a Western twist.

“If you’re going to wear something called Islamic, it should at least be a part of Islamic culture,” said Safaa, an Emirati housewife, shopping at Dubai’s Mall of the Emirates. “Abayas are traditional clothes but jeans and t-shirts are Western fashions with no basis in Islam.”

For that reason, some designers are steering clear of the label of Islamic fashion altogether, even if their designs primarily focus on abayas meant for Muslim women.

“A lot of artists use the term Islamic but I think that’s where it gets controversial,” said male designer Amber Feroz, whose designs have included abaya jumpsuits and short abayas to be worn with leggings or skinny jeans.

“To me, conservative means that strategic places need to be covered but the designs are still sensual garments that have appeal for women.”