Psychology is focus for life trainer

Psychology is focus for life trainer 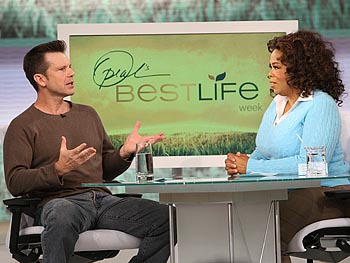 Bob Greene, left, talks to Oprah Winfrey on her show. Provided by Oprah.com

Fitness and weight loss were emotional issues for trainer Bob Greene even before he joined forces with the high priestess of positive thinking, Oprah Winfrey.

It might date back to childhood visits with a great-grandmother bedridden by obesity.

“I often think about my great-grandmother when I work with clients,” Greene says in his new book. “I think deep down I sensed that her days could have been better.”

Better days is precisely the point of both Greene’s book, “The Life You Want: Get Motivated, Lose Weight and Be Happy,” and his Web site, www.thebestlife.com.

Written with a psychologist and a nutritionist, “The Life You Want” delivers a heavy dollop of self-help-style psychology and lifestyle advice alongside diet menus and exercise regimens.

“It’s not just about fitness, it’s about making changes in your life,” Greene said in an interview from California.

Psychology has always fascinated Greene. He said that while all his books - starting with “Making the Connection” (1996) - address the psychological side, he has never gone so deep.

“People say the hard work is getting on a treadmill. That’s the easy part,” he said. “People run up against emotional barriers.”

His most famous client is a case in point.

“Oprah was one of the great success stories for 15 years,” he said, until an emotional one-two punch - the failure of her 1998 movie “Beloved” and a lawsuit brought on by the beef industry - “knocked her off the wagon.”

He said despite her great wealth, she is waylaid by more than her share of what his book identifies as the eight barriers to weight-loss success.

Right now she’s entangled in the second barrier: the business of life, Greene said, adding that Oprah is the first to admit that she is using that as an excuse to avoid making tough, healthy decisions.

Greene said in his 30 years in the business, he’s never seen someone succeed who did not also make a tough life decision, like changing jobs or ending a toxic relationship.

“People who are successful forget about weight loss,” he said. “They concentrate every day on moving closer to the life they want.”

And how fares Oprah? “I still work with her, though not daily,” he said. “We’re in touch weekly. She was the best person at my wedding. I chuckle when someone says, ‘Your client Oprah.’ It’s way beyond that.”Reuters