In light of FMD, pigging out has its consequences

In light of FMD, pigging out has its consequences 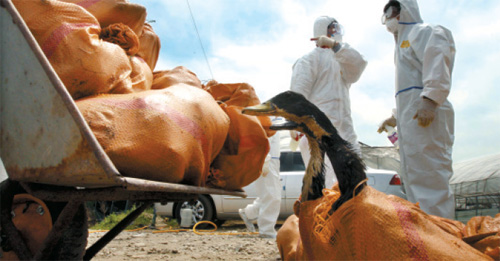 Experts say animal-oriented epidemics will occur more often as long as the country sticks to factory farming, which plays a crucial role of the spread of disease. [JoongAng Ilbo]


At most Korean farms, when a hen begins to lay its eggs at 4-months-old, it is transferred to a wire cage so small that it cannot unfold its wings. To maximize production, farmers artificially shorten the hens’ circadian rhythm. Under extreme stress, they often become featherless.

Pigs, which eat and excrete in different places in the wild, are jammed into small spaces in “factory farms” where they live on top of their own urine and feces.

In Korea, a country where factory farming is prevalent, ethical issues have been raised on the treatment of farm animals and activists have called for increased health and safety standards.

The way farmers treat their animals here has far-reaching implications for animal and human health, and the viability of the industry.

Animal advocates and experts posit that the recent outbreak of foot-and-mouth disease, which has prompted the government and farms to slaughter 3 million animals, is a telltale sign of the unsanitary and unethical treatment of farm animals. 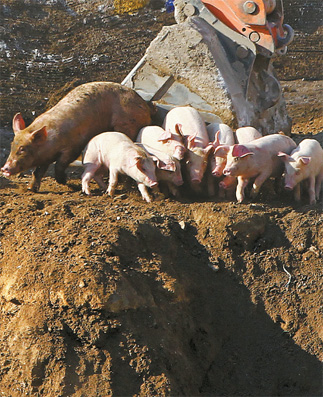 Due to a shortage of euthanasia drugs used to cull livestock, pigs are buried alive last month in Dongducheon, Gyeonggi. [YONHAP]

But this isn’t exactly a new revelation - the issue was raised as far back as three years ago.

The European Union took issue with Korea’s unethical animal farming techniques. When delegates from Korea flew to Brussels for the third round of FTA talks with their EU counterparts in September 2007, one of the stumbling blocks in the process was Korean factory-farming techniques.

Although the EU ultimately rejected Korean meat products from being included in trade deal, the nation’s livestock industry remained vibrant because of demand from other global markets for cheap meat.

Eggs have not always been as widely and cheaply available as they are today. When students brought their lunch to school in the 1960’s and 1970’s, mothers would hide a fried egg under a layer of rice so their child’s lunch would not attract attention from other children.

But with the introduction of intensive farming in the 1990’s, supply soared and prices of meat and dairy products plummeted. 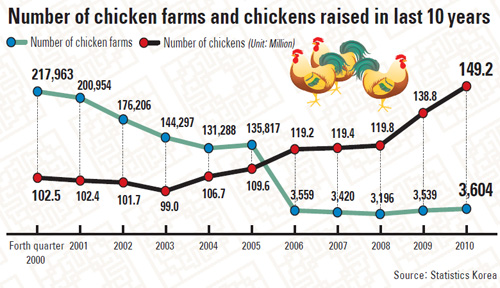 “This figure means more farmers chose concentrated farming rather than free-range farming because it is much more efficient and profitable,” said an official from Statistics Korea, who requested anonymity.

Once a piglet is born, it takes between 160 and 180 days before the animal is served up at one of the nation’s thousands of samgyeopsal, or pork belly, restaurants. When cows reach about 20 months of age, they are shipped to butchers across the country.

And as supply soared with the industrialization of the livestock industry, Koreans’ average income rose sharply with it, causing meat consumption to skyrocket.

Take chicken consumption as an example. Koreans ate 5.1 kilograms (11.2 pounds) of chicken on average in 2000, but that more than doubled to 12.7 kilograms in 2009, according to the Korea Chicken Association.

“It took much longer for Western countries to acquire inexpensive sources of protein, but we did it way too quickly. People remember the scarcity of eggs when they were young and now eat as many as they desire,” said Jeon Kyung-wook, a general manager at the Korean Society for Animal Freedom, an animal rights group.

With the introduction of factory farming in the 1990’s, the health of farm animals and the quality of their meat have deteriorated. This kind of farming is partly to blame for the quick spread of animal diseases. Provided by Korean Society for Animal Freedom

“Older generations still remember the days when it was hard to eat meat and it makes them think of meat as something they should eat more of to make up for last time,” added Jeon.

But as production and consumption rose, health and safety regulations have not kept up pace, causing animal health and meat quality to deteriorate.

Animal rights activists, veterinarians and professors agree that low social recognition of the importance of farm-animal health and safety has made Korea vulnerable to epidemics, including FMD, which is fatal for cloven-hoofed animals like cows, pigs and deer.

The most recent outbreak of FMD started on Nov. 29 last year in Andong, North Gyeongsang, and in two months it swept through the entire nation - except South Jeolla and Jeju Island.

The central government has faced harsh domestic and international criticism for its response to the outbreak.

In December, after the government ran short of euthanasia drugs used to slaughter livestock, Seoul sent thousands of animals to their death by burying them alive.

The government was also accused of reacting too slowly to the outbreak. It choose to delay widespread vaccination so the country could maintain its “FMD-free” status, even though the disease was ravaging the country’s farms.

Having FMD-free status allows Korea to export meat products more easily and maintain its right to block meat imports from other countries.

Instead of vaccinating farm animals, the central government ordered the culling of farm animals within a 3-kilometer (1.86 miles) radius of contaminated farms.

So when the disease breaks through the perimeter, it is easily spread to nearby nonvaccinated farms.

Korea exported 200 billion won ($181.8 million) worth of meat products last year, but the government has already spent 2 trillion won trying in vein to halt the spread of FMD.


Link between outbreak and animal welfare

“[Factory farming] provides the best conditions for viruses and diseases to explode because animals are jammed into small spaces,” said Woo.

He also pointed out the perils of the high amount of antibiotics used in factory farms.

“In order to prevent animals from falling to disease, factory-farm owners are bound to use more antibiotics on their farms and it eventually weakens animals’ immune systems,” the professor added.

“It poses health risks to human populations. This was the lesson from the avian flu crises in Asia over the last 10 years,” Paul Roberts, author of “The End of Food” told the Korea JoongAng Daily via e-mail.

A lack of genetic diversity is another dangerous factor involved with intensive farming.

“All these factory-farm animals’ genes are improved to achieve certain human consumers’ goals, like thicker chicken breasts or better milk,” said Yoo Jeong-chill, professor of biology at Kyung Hee University. “It means they are genetically all the same, and once a disease breaks out at one farm, all animals are meant to die.

“Let’s say [a disease] occurs in an African country, but not everyone dies. That’s because people have different genetic codes. This is the importance of genetic diversity.”

Professor Woo and Yoo both agreed that enhancing animals’ immune systems by raising them in more natural ways is the best option to counter animal diseases.

“If we don’t want to see a super virus in the coming years, which would be immune to any type of antibiotic, moving to free-range farms should be an ultimate goal,” Yoo said. “Above all, a society that buries animals alive is not a healthy and sound society. It encourages violence and brutality if it deals with animals in that way.”

The Korean Society for Animal Freedom has a different reason to promote free-range farming.

“Farmers are bound to have less profit if they keep competing over price. What they have to do is enhance product quality by raising animals in more natural ecosystems,” the rights group said in a statement.

European countries started raising health and safety standards on their farms beginning in late 1990’s, while only a small number of Korean farmers followed suit.

Gang Yu-seong is one of them. He used to raise pigs using intensive farming methods, but he had a change of heart after visiting a farm in Germany 10 years ago.

Now Gang raises about 1,500 pigs in Danyang, North Chungcheong. The pigsty is wide-open so the animals can run freely. Instead of a cement floor - common in factory farms - his barn floor is covered with a thick layer of sawdust.

Weather permitting, the animals are free to roam outdoors. They can eat, sleep and play whenever they want. Antibiotics are not administered unless they fall ill.

Gang said the biggest benefit to free-range farming is having healthier animals.

“My pigs are energetic and it’s hard to see sick ones here.”

An increasing number of farmers are implementing more ethical standards when raising farm animals, said the state-run Center for Rural Information and Culture.

“Just 0.4 percent of farmers produced meat and dairy products in less-intensive ways with less antibiotics in 2007, but that went up to 3.6 percent in 2008 and reached 7.3 percent in 2009,” said Han Cheol-su, an official at the center.

Farm animal welfare awareness among Koreans is increasing, spurred on by animal epidemics, including mad cow disease. The Korean Society for Animal Freedom saw its membership jump eight-fold over the last three years.

“We very much need ‘thinking consumers.’ For too many years, consumers have been passive and have accepted whatever the food industry gave them,” author Paul Roberts said.

“This needs to change. Consumers need to stop thinking of themselves as consumers but as players, participants and investors.”