School delay due to FMD

School delay due to FMD 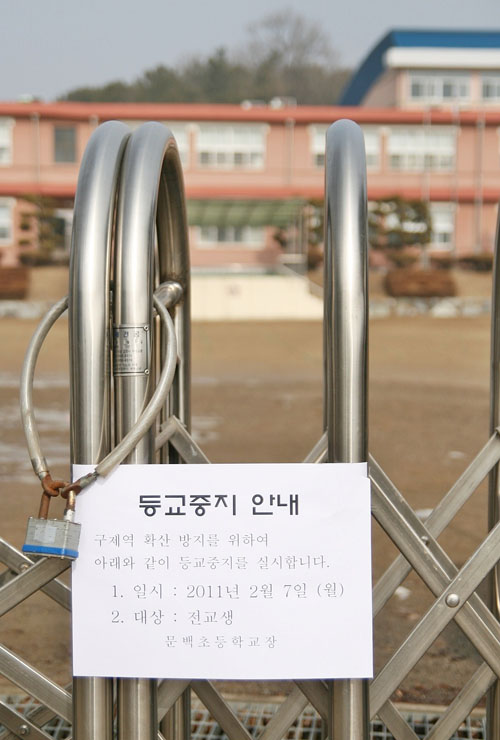 Munbaek Elementary School in Jincheon, North Chungcheong, which started its spring semester on Saturday, was shut temporarily to curb the further spread of foot-and-mouth disease in the province. By Kim Seong-tae

To help curb the spread of foot-and-mouth disease (FMD), the Ministry of Education, Science and Technology announced yesterday that it is allowing all education offices nationwide to delay spring semesters and temporarily bar students from attending school who live near FMD hot spots.

After receiving the emergency notification, 93 schools nationwide promptly followed the request, according to Lee Jun-sun, chief of the School Policy Bureau of the ministry.

“The Ministry of Public Administration and Security on Saturday asked us to cooperate with [preventing the spread of the virus],” said Lee. “We have sent emergency letters to all schools nationwide about the restrictions.”

But, whether schools postpone the semester or bar students depends on decisions by local principals, Lee said, after they consult with local government officials.

And it is up to students to keep up with their studies if they are barred from school, developing a study program approved by school officials.

Most spring semesters start this week, which means that the semesters could be delayed for up to a month, depending on the circumstances in different regions.

The North Chungcheong Education Office said 1,276 students in 60 schools in the province have been ordered to stay at home. The office had sent messages to 100 schools advising the restrictions be instituted until livestock in the affected areas create antibodies against the disease, which takes about two weeks.

The Ulsan Education Office, South Gyeongsang, said yesterday that it has ordered 30 students - six middle school and 24 high school students - living within a 7-kilometer (4.34 miles) radius of a contaminated farm in Yangsan not to attend schools for a while.

According to the Gyeonggi Education Office, the Yeoju Self-Management Agricultural High School in Yeoju has postponed its spring semester until March 2 and canceled its graduation ceremony scheduled for Friday.

The agricultural high school, which raises livestock as part of its curriculum, said, “Although we have already culled all of our pigs and deer raised on the campus, we thought we have to cooperate with protecting cattle and poultry in the city from the FMD virus by postponing the semester,” the school said.

Instead of having a graduation ceremony, the school will send diplomas and presents to graduates and designate a homecoming day in May or June.