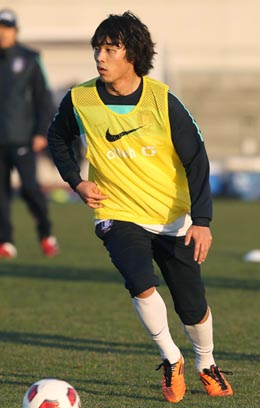 ISTANBUL - Forward Park Chu-young was appointed the new captain of the national football team yesterday, becoming the youngest players to assume the role in the history of Korean football. National team manager Cho Kwang-rae announced the 26-year-old forward as his new captain to replace Park Ji-sung, who recently retired from international competition.

“I’ve decided on Park Chu-young as our new captain,” Cho said yesterday. “Our long-term goal is the 2014 World Cup. In order to net positive results in three years, we need to plan ahead.”

Park Chu-young is the youngest captain in the history of the national team, replacing the record held by his predecessor, Park Ji-sung, who was named captain at 27.

Park is said to have had the full backing of his current and former peers and will be expected to lead the young group over the course of the next three years as it prepares for the 2014 World Cup.

“Even Park Ji-sung and Lee Young-pyo recommended Park Chu-young as the new captain of our squad,” said Cho. “I made the decision after asking for the opinion of all the players on our squad.”

Park is widely regarded as a reserved character off the field but is known to show off much more of his personality with his teammates. Park has also played on the U-23 national team at the 2010 Guangzhou Asian Games with seven of the current national team members as a wild card selection (each team is allowed three players over the age limit).

“Having watched him in training, he’s very talkative and communicates well with his teammates,” said Cho. “I also saw that Park gets along with everyone on the team from the young guys to veteran players alike. The time when the captaincy was awarded to the veterans is gone.” 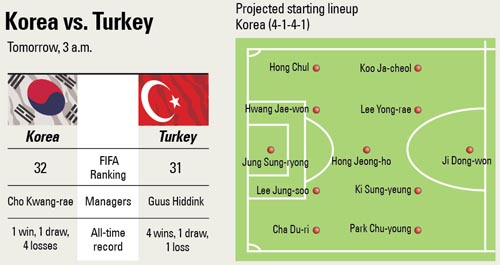 Park was initially hesitant about accepting the role.

“When I was first approached by the manager, I turned him down,” said Park. “I did not feel confident about becoming a good captain. I had never thought about it in the past and I just did not feel comfortable. But I accepted the offer when Cho told me to think about the long-term goal of World Cup.”

Set to play in his first international match as the captain of the national team, Park Chu-young will be expected to play out of position in the upcoming game against Turkey tomorrow morning. Lee Chung-yong will not start the game due to a bruised right knee he suffered during an English Premier League match against Tottenham on Sunday.

In order to compensate for the loss, Cho will depart from his usual 4-2-3-1 formation to a 4-1-4-1 formation, with Park Chu-young projected to start at right wing in Lee’s place while Koo Ja-cheol is expected to replace Park Ji-sung at left wing. Lee is listed as questionable and may receive some playing time as a substitute in the second half.

“We will have three midfielders covering the central area of the field against Turkey so I’m not concerned about our defense, but with Park shifting from center to right wing, I’m a little worried about our attack up the middle,” said Cho.

On defense, Hong Chul is expected to replace the retired Lee Young-pyo at left fullback. The 21-year-old recently made the positional change from left wing to fullback and is capable of providing an offensive spark up the wing.

“I was impressed with Hong Chul’s aggressive style of play,” said Cho after a team practice yesterday. “He also has good decision-making skills.” Korea is ranked 32nd in the FIFA World Rankings, while Turkey is rated 31st.