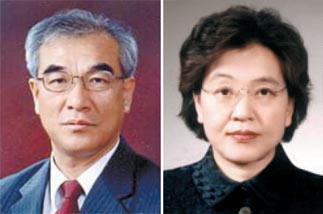 Director of the National Museum of Korea Choe Kwang-shik was promoted yesterday by the Blue House to director of the Cultural Heritage Administration.

Kim Young-na, professor of art history at Seoul National University, has been announced as Choe’s successor at the museum.

Choe served as general director of the National Museum of Korea for the past three years. One of his accomplishments was hosting a dinner party at the museum during the G-20 Seoul Summit last November.

He also worked to establish the Goguryeo Foundation, which later changed its name to the Northeast Asian History Foundation after China said it would incorporate Goguryeo (37 B.C.-668) history as part of its own.

“Though she is a professor of Western art history, she has shown an excellent ability to manage university museums in terms of their Korean traditional art collections,” a senior Blue House official said.

The museum will also display Joseon-era tombstones from Feb. 28 to April 17.