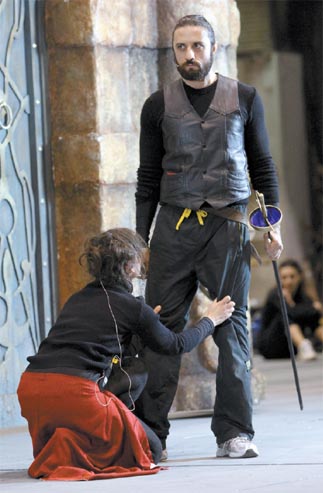 The musical “The Mission,” will be performed until Feb. 26 at Sejong Center for the Performing Arts. Provided by Sang Sang Musical Company

Expectations were so high before the Korean-Italian reproduction of the 1986 Oscar-winning film “The Mission” hit the stage at the Sejong Center for the Performing Arts last Tuesday, that it was one of the hardest tickets to get in the city.

But if audience reviews posted on the “The Mission” Web site are any indication, the musical has been a flop.

Almost immediately after the curtain fell on Feb. 2, ticket-holders were so dissatisfied with the performance that they flooded the musical’s and ticket agency Interpark’s Web sites with pointed complaints.

Interpark’s review page and the official Web site’s message board were taken offline, after they said there were too many posts criticizing certain religions.

It is the first time this has ever happened in Korean theater.

The plan is for the show to complete its Korean run on Feb. 26 and then go on a European tour in 2012 before hitting Broadway the year after.

“This type of production has never been never tried in Korea,” Lee Tae-gon, CEO of Sang Sang Musical Company, said in a press release. “I know people have doubts in this new challenge, but it has been reproduced and now I’m excited to show the audience this musical, which is full of eye-catching scenes.”

The movie won acclaim 25 years ago for the acting of Robert De Niro and music by Ennio Morricone.

Morricone is back participating in the theatrical production.

“The movie is one of my best works and now I am totally engaged in the musical. I’m going to put just as much energy into the musical,” said Morricone in a press release.

He was scheduled to appear at a press conference last Monday at the Sejong Center for the Performing Arts, but his trip to Seoul was delayed due to health issues.

Morricone has composed six new songs for his first musical and his son, Andrea, is playing a prominent role as music director.

“It’s a great challenge for me to transform the work of my dad in film into the musical theater,” said Andrea at the press conference before the premier. The audience, however, reported that they were greatly disappointed about the lack of an orchestra. Instead, prerecorded music blared through the theater.

The production group did try to reproduce the scenic views of South America by installing a 7-meter (23-foot) waterfall on stage.

The cast consists of Italians speaking in English. For Korean audiences, subtitles are provided.

The performance had originally been scheduled to debut last June - but was canceled only two weeks before the opening.

“The Mission” runs through Feb. 26 at Sejong Center for the Performing Arts’ Grand Theater.

Children under the age of 7 will not be admitted. To get to the theater, go to Gwanghwamun Station, line No. 5, exit 1 or 8.