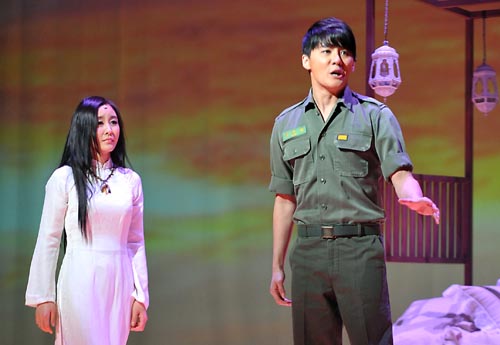 A scene from the musical “Tears of Heaven.” See THEATER, below. [NEWSIS]

Friday: Country pop princess Taylor Swift is gearing up to perform her first concert in Korea. Swift, the winner of seven American Music Awards and four Grammy Awards, will perform a number of songs from her latest album, “Speak,” which was released on Oct. 25.

She will also perform hits from her previous albums, including songs such as “Teardrops on My Guitar,” “Love Story” and “You Belong with Me.”

Saturday to Feb. 19: During this one week series, celloist Jung Myung-hwa, American pianist Sergei Babayan and violinists Clara Kang and Wei-hwang Hong will play a variety of pieces from different genres such as old pop, classic, songs from musicals and current pop music.

Songs will include Johann Pachelbel’s Canon, “Fly to the Sky,” “Sukdaemuri” and others.


LOVE OF THE CENTURY

Sunday: This concert aims to create a harmonic relationship among the worlds of art, literature and music, using both visual and audio elements.

In one piece, for example, the work of French novelist George Sand is portrayed through the music of Frederic Chopin.

This concert will be divided into two parts: classic and popular music.

Feb. 20: English blues-rock guitarist and singer-songwriter Eric Clapton is returning to Korea for the third time since 2007.

Clapton has been inducted into the Rock and Roll Hall of Fame three times and was ranked fourth on Rolling Stone magazine’s list of the 100 top guitarists of all time.

Schiff won a Grammy Award for best instrumental soloist performance in 1990 for his version of Bach’s “English Suites,” and in 2007 he won the Royal Academy of Music Bach Prize.


THE MASTERS SERIES OF THE KBS SYMPHONY ORCHESTRA

Feb. 25: The KBS Symphony Orchestra will present pieces by Mendelssohn with violinist Stefan Jackiw. Jackiw is an American classical violinist who has played Mendelssohn pieces on the European stage since 2000 and is now performing here.

Feb. 26: Mexican operatic tenor Francisco Araiza has twice won the Orphee d’Or by the Academie Nationale du Disque Lyrique Paris. In this concert, he will be performing pieces from Mozart, Veber and Verdi.

At the concert, the band will play songs from its 2010 album “Supernatural,” including “Smooth” and “Maria Maria.”

To Feb. 27: Based on the movie of the same name, and with music by Elton John, this musical has been a hit worldwide.

This is the first non-English language production of the show, which was previously produced in Britain, Australia and the United States.

Performances are at 8 p.m. Tuesdays to Fridays and at 2 p.m. and 7:30 p.m. on Saturdays, Sundays and holidays.

In this performance, grandmas dance around to traditional Korean music, as well as more modern pop songs, to try to revive their young spirit.

To Feb. 27: The Korea National Ballet is presenting the Paris Opera Ballet’s version of “Giselle” for the first time in Korea.

The ballet tells the story of a peasant girl named Giselle who dies but comes back as a ghost to protect her lover, Albert, from a group of evil female spirits.

The ballet was first presented in 1841, and the choreography is based on the original French version from the 19th century.

To Mar. 19: This play is about a love triangle between a Vietnamese singer, a Korean private and an American Colonel during the Vietnam War’s Tet Offensive in 1968.

Xiah Junsu from the Korean idol group TVXQ will perform in the play.

This story of Ethiopian princess Aida is one of forbidden love.

Aida is captured and sold into slavery in Egypt, where Egyptian military commander Radames falls in love with her.

As the military commander of Egypt, Radames is not allowed to love a woman from a different country, and he struggles to make a decision to choose between her and his service to the Pharaoh.

To make matters worse, the Pharaoh’s daughter, Amneris, is in love with him. Will Radames chose love or success?

Friday to Feb. 14: The 29th Korea Galleries Art Fair that started in 1979 is back to give a boost to the art market and encourage local emerging artists.

This fair will provide unique opportunities for lovers of art to add to their collections - while others will have the opportunity to simply enjoy the art and learn more about Korea’s current art industry.

To Feb. 17: Pyeongchang originally postponed the start of its annual trout festival from late December to early January because of concerns about foot-and-mouth disease. But the festival is in full swing now, offering plenty of snow, ice and trout fishing.

Saturday to Feb. 20: This festival is separated into five different sections, each providing a different activity or opportunity for visitors to enjoy themselves, including snow sports and snow sculptures.

Festival programs run from 10 in the morning to 6 in the evening.
Take any bus from the eastern Seoul Terminal that goes to Hoenggye.
(033) 336-6112 , www.snowfestival.net

Feb. 17: Celebrate the full moon with traditional Korean performances like “Minyo,” “Daebuk” and others.

There will also be games, dance competitions and food.