2nd round for North-South talks

2nd round for North-South talks 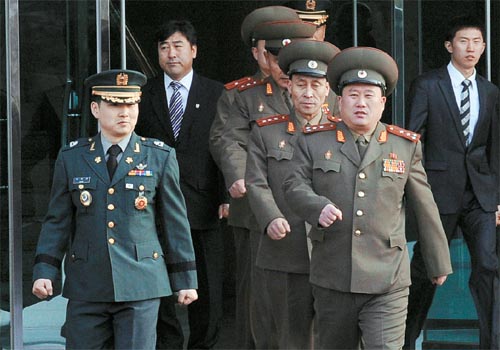 North Korean Col. Ri Son-kwon, front right, and other North Korean officers, walk south of the truce village of Panmunjom in Paju, Gyeonggi, for talks with South Korean officers. Military officers from North and South Korea met at the heavily fortified border yesterday for the first talks since tension peaked on the peninsula last year. [REUTERS/YONHAP]


The first military working talks between South and North Korea in four months were held yesterday in Panmunjom from 10 a.m. until late in the evening with numerous halts, signaling a long slog ahead for the two sides to agree on high-level military talks. They will meet again tomorrow.

Three officials from each side met to determine the timing and topics to be discussed at future high-level military talks.

North Korea asked that those talks be held a day before the birthday of its founder Kim Il Sung, which falls on April 15. The South Korean delegation requested the talks be held after May.

The two parties started their dialogue with “talk of the weather,” said an official from the Ministry of National Defense and without the customary, antagonistic political remarks, discussion commenced on the agenda and other details of future high-level military talks.

But the first round of talks was cut short and officials adjourned for lunch at 10:54 a.m. The meeting continued at 2:00 p.m. with several recesses.

In such talks, anyone from a general to the minister of national defense can lead dialogue, the South Korean Defense Ministry said.

North and South Korea initially agreed that last year’s attacks against South Korea - the sinking of the Cheonan and the shelling of Yeonpyeong Island - would be discussed at high-level military talks. A government official said yesterday that the North would have to show a responsible attitude for the two Koreas to move on to high-level talks.

However, the North continues to deny being behind the Cheonan sinking, and asserts that the Yeonpyeong shelling was provoked by the South Korean Navy intruding into its maritime territory.

Since North Korea requested a discussion of “recent military issues at hand” during their numerous requests for talks earlier this year, Seoul expects that the Northern Limit Line will also be discussed during high-level talks.

The disputed maritime border between the two Koreas in the Yellow Sea has been the scene of several naval clashes as North Korea refuses to consider it a legitimate border.

North Korea has also been objecting to the upcoming Key Resolve exercises to be conducted by South Korea and the United States, as well as all other joint military drills. With so many issues to resolve, one government official said yesterday it may take several preparatory sessions like yesterday’s before high-level talks are held.