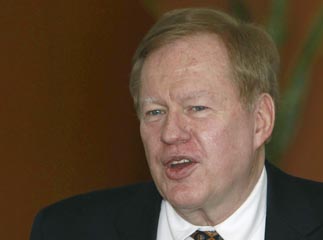 Local analysts suspect that King, who is currently in Seoul, informed the South Korean government of the request and is discussing a joint response to it.

It is the first time in years that a behind-the-scenes diplomatic discussion between Pyongyang and Washington on aid has come to the surface. U.S. food aid to the North has been suspended since March 2009 after the Kim Jong-il regime rejected a U.S. proposal to increase the number of Korean-speaking food-distribution monitors to make sure aid was getting to the public.

Han told King that the North was willing to enhance international monitoring of food aid “as much as the U.S. wants,” the source said.

King, who came to Seoul on Sunday, started meetings with Seoul officials yesterday, including Wi Sung-lac, the top envoy on North Korean nuclear issues. At a brief media conference after the meeting with Wi, King did not elaborate on the purpose of his visit or his discussion with the South Korean envoy, saying only it was “very good, very serious and a very thoughtful discussion.”

When asked whether food assistance to the North was on the agenda, King said they “talked about a lot of issues.”

“[It is] extremely important for the U.S., as we pursue our policies toward North Korea, to coordinate with the government of South Korea,” King said. “We have a close working relationship, we are able to work together well on issues, we share our analysis, we share our ideas in terms of making progress.”

The official United States stance, as U.S. Assistant Secretary of State Kurt Campbell said earlier this month, is that it does not have a plan to resume food aid to the North for now.

“The U.S. does not think the North has met conditions to get U.S. food aid,” the source said.

And even if Washington decides to resume aid, it will take time because of congressional procedures, the source said. But some analysts see the possibility of change, citing some opinions in the U.S. State Department in favor of engaging the North with aid to sway its attitude on other issues, including denuclearization.