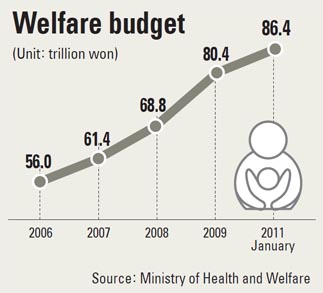 While the Democratic Party has been pushing a proposal to expand welfare benefits for Koreans, a government investigation has shown that even the current welfare system is full of loopholes, leading to numerous welfare frauds in the country.

According to a recent report by the Ministry of Health and Welfare, investigators found that 179,663 people abused the welfare system last year, the only year for which figures were available, receiving pensions they were not entitled to.

But, it has been difficult to figure out which Koreans were abusing the system. Still, the ministry last year established a new social welfare computer network to hunt them out, and it found that 328.8 billion won ($295 million) was spent last year on such fake welfare recipients.

In November of that year, Kim purchased three properties worth 13.9 billion won but did not report the purchases and consequently did not pay property acquisition taxes. Kim’s deception was finally uncovered by the new computer network and his subsidy was cut off.

But critics say more safeguards are needed to combat fraud. And, some of the fraud cases were flagrant.

A man surnamed Moon, 60, in Gwangju, South Jeolla, was charged with illegally receiving a pension for veterans amounting to 160 million won by lying about his mother’s death for 24 years. Moon’s mother, who was entitled to the veteran pension on behalf of her husband, had passed away but rather than reporting his mother’s death, Moon made his aunt look like his mother to continue receiving the pension. He currently runs a retail store selling seafood.

Jeong Hee-seok, police officer of the Dongbu Police Station in Gwangju, lamented the lack of oversight. “There wasn’t any form of management files and no one investigated the actual conditions of the assistance receivers,” said Jeong. The problem, he said, stems in part to a lack of staffing.

The Gwangju Veterans Welfare Center’s compensation team leader says abuse cases like Moon’s are possible because “although there are a total of 12,000 residents in Gwangju who are entitled to pensions for veterans, there’s only one worker overseeing cases on the compensation team.”

Kim Choon-su, section chief of the team, pointed out that the problem is widespread and that “the possibility of similar cases throughout the country should be taken into account.”

The recent controversy over “free welfare” brought up by the Democratic Party, which urges not only free school lunches but free health care for the entire population, is modeled on developed countries. But Sweden, Australia and Denmark in 2009 had a per capita income of about $50,000, more than double that of Korea, which was $20,000. Experts say it is difficult to compare these countries to Korea, which has so many loopholes in its management system.

A case in point: A man surnamed Kim, 33, from Namyangju, Gyeonggi, who has three daughters, has also been receiving 100,000 won per month from the government as a pension for child rearing because he reported his monthly income to be only 580,000 won.

However, Kim and his wife both got jobs last March and started earning 5.6 million won per month, but they did not report the fact. They were finally caught.

Even the welfare system for the disabled is being abused.

A man aged 44, who isn’t blind, falsely registered himself as a blind person in 1988 and yet managed to obtain a driver’s license in 1994; apparently others would help him with driving. He took advantage of up to 70 different benefits including highway toll fees as well as acquisition and registration tax exemptions for his vehicle. A total of 4,500 out of 4,687 people who had registered as being blind were revealed to be abusing the system after it was found they had obtained driver’s licenses,.

This year’s welfare budget is 86 trillion won, accounting for 28 percent of the country’s total budget. The amount has doubled since 2004, when it was 44 trillion won.

“I don’t even have time to deal with all the people who visit in person,” said Kim Seong-hoon, a social worker from Jeju Island. “Site visits are near-impossible.”

Park Soon-il, head of the Korean Social Policy Institute, said, “Despite a rapid increase in welfare assistance recently, the management system can’t meet the scale. Now is the time to think about efficiency.”