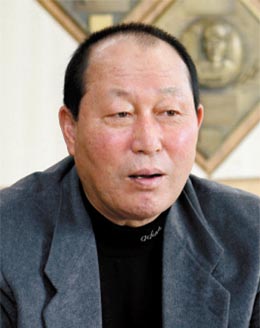 Kim In-sik, a former national team manager and current KBO technical adviser, is showing strong interest in managing NCsoft’s expansion club when it is likely to join the league in 2013.

With the KBO on Tuesday approving NCsoft’s bid to start a new club in Changwon, South Gyeongsang, Kim gave a clear response when asked about his interest in a managerial position with the expansion club.

“I would be thankful if such an opportunity came along,” said Kim. “I am interested in returning to the KBO in a managerial role.”

The 69-year-old last managed a KBO team in 2009 - with the Hanwha Eagles - and is considered one of the most accomplished managers in the history of the league. Kim started his managerial career with the expansion club Ssangbangwool Raiders in 1990. During his 19-year managerial career in the KBO, he won the Korean Series twice - once with the OB Bears in 1995 and again with the Doosan Bears in 2001. Kim also managed the national team at the World Baseball Classic in 2006 and 2009, leading Korea to the semifinals in the inaugural event and a second-place finish in the 2009 tourney.

Having managed the Raiders in 1990, Kim has experience dealing with player selection and other challenges that come with working for an expansion club. The Raiders were the last expansion club in the KBO, making the jump to the KBO in 1991 after competing in the second-tier league in 1990.

Kim led the Raiders to a record of 52 wins, three ties and 71 losses in 1991, good for sixth place that year. Kim resigned the following season after the Raiders finished last in the league standings but would go onto establish himself as an elite manager with the OB Bears - later renamed the Doosan Bears.

“Each team was allowed to protect 20 players and we were allowed to select one player from each team’s unprotected list. They were good players,” Kim said about building a roster for the expansion club. “But it was tough to fill out the roster with rookies and those who had been released by other KBO clubs.

“With established clubs, the front office plays a big role in matters such as player selection and other details. But with an expansion club, the manager plays a big role.”

NCsoft’s expansion club will likely compete in the second-tier league starting next year before entering the KBO as early as the 2013 season.