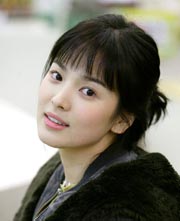 Actress Song Hye-kyo has released a photo essay titled, “Moment, Song Hye-kyo,” which was created in collaboration with world-famous photographers.

An additional 150 staff members were involved in the production process, and the photos were shot in six countries on three continents.

The limited-edition publication, which was released on Jan. 28, is being sold worldwide, and half of the 2,000 available copies have already been sold overseas. That day, Song told the press that a portion of the profits will go to a charitable organization.