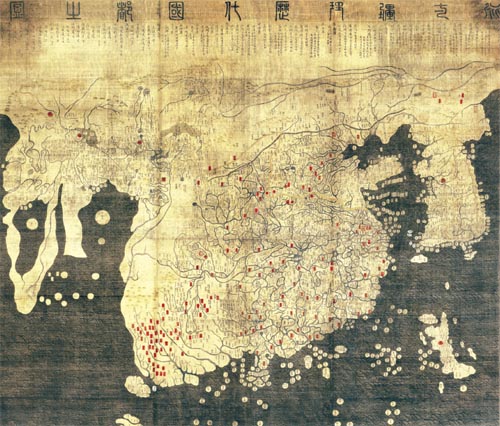 This digitally enhanced copy of the Gangnido was restored by Ryukoku University of Japan. The 1402 map outlines China, Arabia, Africa and Europe and an exaggerated Korean Peninsula. Provided by Choi Seon-wung

Choi was taken aback by its content: a masterful digitally enhanced recreation of a 15th century world map - the oldest world map in existence.

The map has immense historical significance, not only for the world - but especially Korea. Originally drawn in 1402 by three Koreans, it easily predates any comprehensive world map by Chinese, Japanese or European cartographers.

The name of the map originally created by Kim Sa-hyeong, Yi Mu and Yi Hoe is called the Map of Integrated Lands and Regions of Historical Countries and Capitals, also known as the Gangnido. The Gangnido is the cartographers’ synthesis of two Chinese maps, both of which have long been lost.

Little is known of the original map’s fate. At some point in the 15th century, historians assume it was copied in Korea before being stolen by invading Japanese forces later in the next century. This is the copy that exists at Ryukoku University today.

Choi said he found the digitally enhanced map’s exuberant colors and elegant calligraphy even more vivid than the centuries-old Gangnido copy, which he saw a few years ago at Ryukoku University in Kyoto. In fact, it took 10 years for the university to digitally restore the modern Gangnido’s faded color and blurred letters.

The Gangnido incorporates the known world at the time of the early Joseon Dynasty. Because its production was before Christopher Columbus’ discovery of America in 1492, the ancient map only delineates Asia, Europe and Africa. The map is also celebrated because it clearly marks the Nile River. 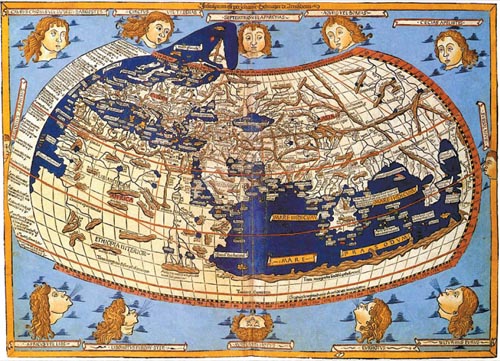 This world map produced by Johannes Schnitzer in 1482 shows Africa connected to Antarctica, separating the Atlantic from the Indian Ocean. [JoongAng Ilbo]


Although the proportions representing the continents are not accurate, the contours of coastlines closely outline those of today. Ryukoku University’s 15th century copy was colored and hand-drawn on silk measuring 168 centimeters (5.5 feet) wide and 158.5 centimeters in height.

King Taejong, the third king of the Joseon Dynasty, commissioned the production of the map a decade after the foundation of Joseon in 1392. According to a postscript by Joseon official Gwon Geun, the Gangnido combines two Yuan Dynasty (1271-1368) Chinese maps; the Map of Vast Reach of Resounding Teaching by Li Zemin and the Integrated Map of Regions and Terrains by Qing Jun. The Korean map also incorporates the Map of the Eight Provinces of Joseon, along with a Japanese map known as Gyoki-zu, which were made during Emperor Shomu’s reign (701-756).

The 1402 map offers proof of Korea’s awareness of the world during the early Joseon Dynasty.

“If I had to choose Korea’s most valuable cultural asset, I wouldn’t hesitate to pick the Gangnido,” said professor of geography Yang Bo-kyung at Sungshin Women’s University.

Like many of Korea’s significant cultural artifacts, the 15th century copy of the Gangnido remains in Japan. Some historians say the map was probably taken during the Imjin War (1592-1598) in one of Toyotomi Hideyoshi’s invasions or possibly more than 200 years later during Japan’s Meiji Restoration. Hideyoshi reportedly gave Japan’s Gangnido map to the Honganji, a Buddhist temple in Kyoto, which later divided into two branches, one of which is associated today with Ryukoku University, which would explain why the map rests there today.

Due to preservation issues, Ryukoku University has not uncased their Gangnido.

It was not until 1982 that Korean scholars were even aware of the map’s existence. Lee Chan, a late professor at Seoul National University, acquired a photograph of the Gangnido. He then asked painters and calligraphers to reproduce the map as best they could. However, there were major gaps between the Gangnido in Japan and the version that Lee commissioned.

“Though the copy version of Gangnido was delicately depicted, there were some differences when compared to this digital version in terms of shape and calligraphy,” said Choi Seon-wung, CEO of map production company Mapping Korea.

What made the resurrected world map more intriguing was that digital technologies emerged in the last 20 years allowing scholars to restore damaged portions of Ryukoku University’s Gangnido. The school’s science and engineering department devoted a decade to the restoration process since 2000, applying state-of-the-art technology, including a precision digital camera and fluorescent X-ray.

Their efforts paid off. Previously unrecognizable markings on the map were revealed to be the Great Wall of China and the Amur River, which now forms the border between eastern Russia and northeastern China. More place names were also revealed.

“There were some errors in place names on the China portion - since the original was not legible. We are trying to fill the blanks through the digitalized copy,” said Choi Suh-myun.

The Korean map is said to be superior to contemporary maps of the time. Scholars mostly agree that the next best world map from the time was produced in 1482 by German cartographer Johannes Schnitzer. The Korean and German maps differ significantly in that the latter connects the African continent to Antarctica, while the former does not. With the German map, it would have been impossible to traverse the Atlantic and the Indian oceans.

Schnitzer’s map stems from another map drawn up by Ptolemy (90-168), a Greek astronomer and geographer.

The Gangnido, on the other hand, accurately delineates the southern tip of Africa surrounded by the sea. The size of the continent is much smaller than it actually is, but its coastlines closely match modern maps of Africa’s contours. Scholars especially praise the Gangnido’s precise marking of the Cape of Good Hope. The original map predates the first European explorer’s discovery of the southern tip of Africa by 86 years. Portuguese explorer Bartolomeu Dias is said to be the first European to reach the cape in 1488.

How could cartographers of the Joseon Dynasty create such an extensive map without ever having set foot in Africa? Experts point to East-West cultural exchanges. Unlike the Europeans of the time, the Arabs had superior cartographic knowledge of Africa, which was transmitted to East Asia via the Mongol Empire.

The Gangnido reflects the inquisitiveness of Koreans of that time. Gwon Geun - the Joseon official - said on the map’s deny_deny_deny_deny_postscript: “As the map is neatly written and displayed, one is able to see the world without venturing outside,” adding, “looking at the map and gauging the distances of regions provides helpful information for governing the nation.”

Another distinct feature of the Gangnido can be found in the exaggerated size of the Korean Peninsula, which was deliberate. The postscript explains: “In the Li Zemin’s ‘Shengjiao guangbeitu,’ there are a lot of territorial omissions.

“The map of our country was especially expanded,” he added.

Some experts see the enlarged peninsula as a gesture of defiance against the rein of the Yuan Dynasty.

Professor Lee Chan evaluated the Gangnido in the preface of his 1991 book, “Old Maps of Korea.”

“The Gangnido is a breakaway from the Sinocentric perspective,” he said.

“The map was produced to emphasize the fact that Joseon is not only large but stable, like China.”

Oh Sang-hak, a professor at Jeju National University, said that based on cartographic knowledge passed on by Arabian traders, the Gangnido surpasses the perspective of a Sinocentric world by incorporating Europe and Africa. “Those history textbooks that posit the Gangnido is a reflection of Sinocentrism should be revised,” Oh explained.

While it is true that the Gangnido greatly exaggerates China’s scale and places the country at the map’s center, cartographer Choi said labeling it “Sinocentric” would not be an honest assessment. “People should not just look at these old maps, but they have to ‘read’ them,” he said.