Tiger faces showdown in the desert

Tiger faces showdown in the desert 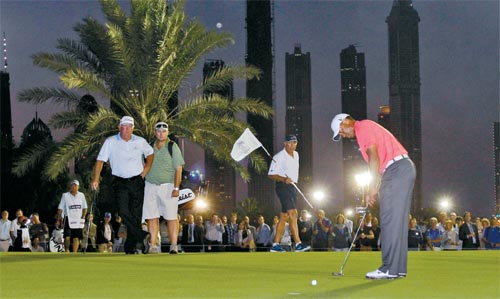 Tiger Woods of the U.S. plays a shot during the Challenge Match at the Emirates Golf Club ahead of the Dubai Desert Classic golf tournament in Dubai, United Arab Emirates, on Tuesday. [AP/YONHAP]


DUBAI - Tiger Woods will discover just how far his game has slipped when he joins Lee Westwood and Martin Kaymer in a mouth-watering matchup of golf’s three top-ranked players in the Dubai Desert Classic this week.

Woods was overtaken by Briton Westwood at the end of last year, and then the mercurial 26-year-old German Kaymer, the U.S. PGA champion, in January at the summit of golf’s world rankings.

The American’s swing as well as his private life fell apart last year following allegations of multiple infidelities that cost him his marriage and a chunk of the 2010 season.

Dubai marks Woods’ second tournament of the year, and his suspect technique will be right back under the microscope after he finished 44th last week in the Farmers Insurance Open after closing rounds of 74 and 75.

Westwood, for one, cannot wait for the chance to go head-to-head against a man who had dominated the sport virtually unchallenged since the late 1990s - picking up 14 Majors along the way - until his brutal fall from grace last year.

“It’s a fantastic draw for the tournament and for the people watching,” Westwood told reporters on Tuesday as he looked forward to Thursday’s midday three-ball.

“That’s what people like to see. Certainly at other events where you draw the three main champions together, it’s always exciting.”

Mohamed Juma Buamain, vice chairman and chief executive officer of Golf in Dubai, said ticket sales were up 30 percent compared to last year, when Woods elected not to compete in Dubai following the turmoil that overtook his private life.

Westwood leapfrogged past the 35-year-old American to become the world No. 1 last October.

The Dubai Desert Classic will be the first event since then that Westwood has played with both Kaymer and Woods, let alone the same three-ball.

“Having a player like Tiger who has dominated the world rankings over the last 15 years and also the No. 1 and No. 2 as well as playing in the same three-ball is great for the European Tour,” said Westwood.

The trio have been joined in Dubai this week by Woods’ long-time close friend and fellow U.S. Masters and British Open winner, Mark O’Meara.

O’Meara is convinced that Woods can end his 14-month title drought and also set about matching Jack Nicklaus’ all-time record of 18 Majors.

“Knowing Tiger as well as I do, I know his heart is still on the Major championship (U.S. Masters, U.S. Open, British Open and U.S. PGA),” O’Meara told reporters.