GNP task force to take up issue of Constitution

GNP task force to take up issue of Constitution 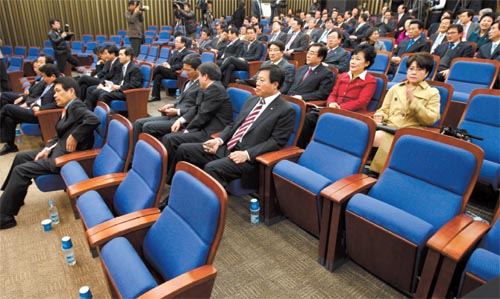 The ruling Grand National Party holds the second day of a meeting of its lawmakers to discuss amending the Constitution yesterday. Fewer lawmakers attended the special session than they did on Tuesday. [YONHAP]


The Grand National Party yesterday endorsed a plan to create a special task force to address the specifics of amending the Constitution, taking a step forward to realize President Lee Myung-bak and his loyalists’ idea of ending the current presidential system.

The decision, however, was adopted amid the opposition of lawmakers loyal to Park Geun-hye and centrist members of the party, signaling that yet another factional split is brewing inside the ruling party.

GNP spokesman Ahn Hyoung-hwan said yesterday that lawmakers have agreed to establish a special body inside the ruling party to address the issue.

According to the GNP, 113 of its 171 lawmakers attended the session yesterday, and 90 lawmakers were present when the decision was adopted. During yesterday’s session, 18 lawmakers took turns to air their views.

“At the general assembly of lawmakers, we decided to create a special body to address the issue and the specifics on its establishment were delegated to floor leader Kim Moo-sung,” Ahn told reporters. “Some lawmakers expressed their opposition to the establishment of the special body, but the plan was eventually endorsed by applause.”

The special task force could be established as a permanent body by obtaining approval of the party’s Supreme Council or it could be formed under the party’s policy committee.

With the conclusion, the GNP wrapped up the discussion on amending the Constitution one day earlier than the original time line of three days.

And, in contrast to the high turnout on the first day, yesterday’s meeting received less attention. Attending yesterday’s meeting were mostly lawmakers loyal to President Lee Myung-bak and those who support the idea of amending the Constitution, but some pro-Park Geun-hye lawmakers were also present.

The pro-Park lawmakers had been silent in response to the pro-Lee faction’s move, but that changed yesterday as more of them voiced their opposition to the idea.

Representative Lee Hae-bong said he opposed constitutional amendment, arguing that the timing was wrong and the approach was too political. “Who would like to have a new conflict within the GNP and who will take responsibility for it?” he said during a meeting with reporters, adding that he had also spoken about his opposition at the meeting of lawmakers.

The pro-Park faction’s opposition was also heard outside the GNP meeting.

“Politicians are servants of the people. When they waste energy on the projects that the people have no interest in, then they cannot properly do the jobs that their masters want them to do,” Representative Lee Hahn-koo told CBS Radio yesterday.

Another pro-Park lawmaker, Lee Hye-hoon, criticized the pro-Lee faction’s move in her interview with PBC Radio. “I don’t recall that the GNP adopted a platform to amend the Constitution,” she said. “Even if we did, it is hard to understand that they suddenly want to implement it four years later.”