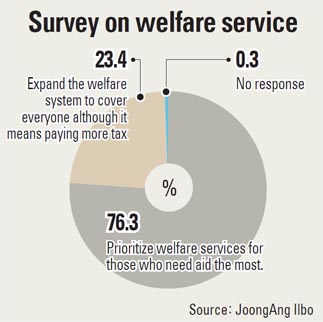 Jo Young-soo, 52, was laid off during the Asian financial crisis and has been receiving basic living subsidies for more than 10 years. After losing his job, Jo (which is a pseudonym created by the Daegu resident) moved from construction site to construction site doing manual labor to make a living, until he had an accident seven years ago.

He hasn’t worked since. Jo and his wife have a monthly income of 800,000 won ($720). Half of that is earned by Jo’s wife, surnamed Lee, 52, who works as a cleaning lady. The other half comes from the government as a basic living allowance.

“Ever since the accident, my husband has been quite discouraged,” Lee said. “He doesn’t even try looking for a job. He has nothing - no education and no money. Whenever I tell him to get a job, he fumes and frets.” She says the situation is hopeless.

Once every three to four months, Jo receives a phone call from the neighborhood’s welfare department urging him to find work but the department provides neither motivation nor any actual help in finding a job.

The aim is to help people like Jo, who has the ability to work.

But to make this customized welfare system work, identifying the specific situation of each recipient of public assistance is a must.

However, when the JoongAng Ilbo inspected several major community welfare departments, there was no sign of a customized welfare system except at one or two places. And at those places, the system was stressed to the limit, with too few workers to handle a massive workload.

The JoongAng Ilbo found that most of the centers’ employees were overwhelmed with paperwork and have to deal with a constant stream of complaints and questions. It seemed that it was impossible for staff members to even think about conducting on-site case studies in homes.

As part of adopting a new, integrated social welfare computer network last year to help manage the system, the government ordered welfare officials in neighborhood community centers to only focus on carrying out the new customized welfare system while city halls or district offices were to take over the job of determining the eligibility of those receiving public assistance.

But the reality is different.

The North District Office in Daegu, for instance, saw an increase in its welfare budget to 175.5 billion won this year from 72.1 billion won in 2006, but only six more workers were added to the staff of 60.

Two workers at a municipal welfare office in Daegu had to be relocated to a district office to manage the new computer network.

“With the current situation, on-site visits are impossible,” said Kim Dong-hoon, 41, a social worker at the center. “Social welfare is expanding, which leads to more work for social workers like me.

But if I went on on-site visits, there would only be one worker left at the center, unable to finish all the work alone,” he said.

Kim said that in order to implement the customized welfare system, a social worker should bond with recipients to figure out their specific needs. But the lack of staff works against this goal.

One social worker in Daegu, Gang Gyeong-sook, 52, was hospitalized last year after suffering from a herniated disc. Because she was the only social worker at the center, she had to receive calls from her hospital sickbed. And when Gang returned to work, 300 cases were waiting on her desk.

Another social worker, Kim Seong-hoon, 39, at a community center in Jeju Island, takes care of 4,166 households. Kim does on-site visits on weekends because it is impossible to do so during weekdays due to the mountain of paperwork each day.

Despite the lack of social workers, there has been success at certain locations. Nowon and Gwanak districts in Seoul have managed to help more recipients, thanks to the strong will of the workers.

As soon as Kim Seong-hwa, was appointed the head of Nowon District Office last July, he added 56 staff members at the district’s community centers, up from its initial 67 workers. At the community center where Lee Myeong-hwa works, three more people were recently added.

The Gwanak District Office had appointed Yoo Jong-pil as the new head on the same month as well. Yoo started to reduce the workload for social workers, such as cleaning and minor paperwork.

But there is a long way to go, and some of the problem relates to just keeping social workers.

Lee Seong-su, head of public relations at the Korea Social Service Welfare Administration, said that “since social service is an arduous job, many civil servants move to other departments after working for only six months to a year.”

And while the controversy over “free welfare” policy continues, three out of four Koreans believe that the money should be spent on those who are in urgent need of public assistance rather than trying to give benefits to everyone, according to a recent survey conducted by the JoongAng Ilbo.

According to the results, 76.3 percent said “the government should prioritize the needy and distribute financial support accordingly.”

Meanwhile, 23.4 percent replied that there should be a free welfare policy for everyone even if that meant they would have to pay higher taxes.