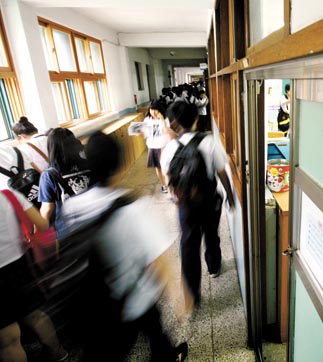 Students will move about to different classrooms under the proposed new system by 2014. [JoongAng Ilbo]

The Ministry of Education, Science and Technology announced yesterday that it will change the school class system by 2014, allowing middle and high school students to move to different classes to take different subjects, similar to the American system.

Under the current class system, each teacher visits students in their classrooms and gives lectures to them.

“This innovative education measure will enable students to take classes based on their academic performance level,” Education Minister Lee Ju-ho said in a press briefing yesterday.

“Some of the schools across the country have already been running a pilot program since 2009, and the ministry got a positive response from parents and students,” Lee said.

According to the ministry, 806 of 5,383 middle and high schools run the pilot program.

The ministry plans to expand the program to all middle and high schools by 2014.

Because the comprehensive changes will require significant funding, the ministry will ask schools to choose from two options: Either implement the new system with five subjects - Korean, English, math, social studies and science - or implement the system with only two subjects that the schools can choose.

“In the case of an English classroom, for example, it will be equipped with all sorts of audio-visual equipment for students,” Lee said. “In the case of a Korean class, desks in the classroom will be arranged in a discussion-friendly position, so that students and teachers can freely jump into discussions over topics at any time.”

In second foreign language classes, Lee said classrooms could be decorated with pictures and artifacts from foreign countries, “to infuse an atmosphere of the country’s tradition.”

In math classes, more chalkboards will be installed so that students will have enough space to solve math problems.

The ministry believes schools won’t suffer adapting to the new system because 82.9 percent and 82 percent of middle and high schools, respectively, are already running classes of some subjects such as English and math based on students’ academic performance.

The ministry plans to develop course guide materials for teachers.

It will also hire more teachers.

“Recruiting excellent teachers is the most crucial issue here to implement this system,” Lee said.

“More teachers are needed for the system,” he said, “and we plan to fill the need by hiring more temporary teachers in schools.”