Lawmaker apologizes for remarks to students

Lawmaker apologizes for remarks to students 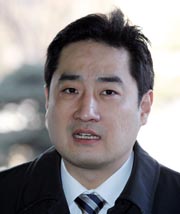 A lawmaker standing trial for insult, libel and false accusations over alleged lewd remarks at a dinner with students apologized yesterday before entering court, seeking forgiveness from people hurt in the incident.

During the trial, the prosecution asked the court to punish Representative Kang Yong-seok with two years of prison. “A lawmaker has the duty to respect laws, but he had defamed others and made a false accusation despite his duty,” a prosecutor said. “He, therefore, deserves a severe punishment.”

The 41-year-old first-term lawmaker representing Mapo B district of Seoul was indicted by the Seoul Western District Prosecutors’ Office in September after a probe into the remarks made in July.

In an exclusive article, the JoongAng Ilbo reported about Kang’s lewd remarks made at a dinner with about 20 university students. The report said Kang told a female student who aspired to be a broadcaster that she’d have to “go all the way” to succeed. Kang denied the report and filed a libel suit against the reporter. The JoongAng Ilbo then sued Kang on charges of defaming the newspaper and the reporter.

“Whether I am guilty or not, I apologize to all the people who had been hurt,” Kang said in a statement.