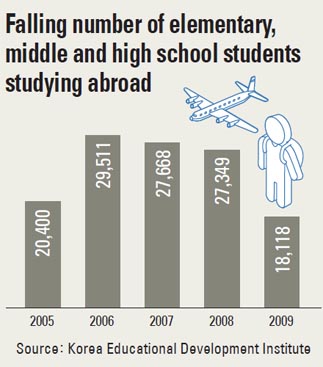 The decrease of 9,231 students has been the biggest ever since the trend of going abroad to study started to take off in 2000. The number of Korean students studying abroad peaked in 2006 when 29,511 students were outside the country for academic reasons.

Nationwide, the number of elementary school students experienced the biggest decline with a 4,162 decrease from the class of 2008 to 2009. High school students showed the smallest decrease with 1,904 less students leaving to study abroad during the same period.

The biggest declines were seen in the Seoul and Gyeonggi areas, as these were the regions with the most students previously going abroad to study.

As this abrupt decline is the first to be observed, analysts believe that this may be due to an overall decline in demand for education abroad in Korea, as the current administration vowed when President Lee was taking office that English education would be improved in the country.

Other experts have said that this decline may only be temporary, thanks to the global financial crisis of 2008.