With lackluster start, Korea has long way to go in rebuilding

With lackluster start, Korea has long way to go in rebuilding 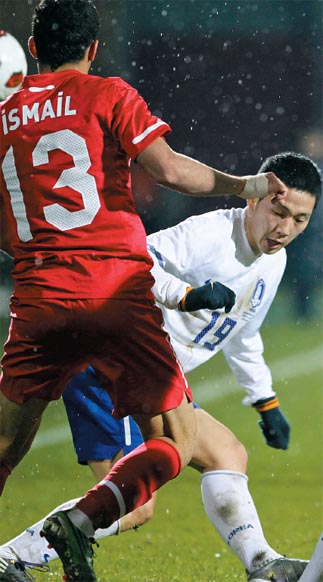 Nam Tae-hee, right, battles for possession of the ball against Ismail Koybasi during an international friendly football match against Turkey in Trabzon yesterday. The match ended in a scoreless draw. [YONHAP]

TRABZON, Turkey - Korea’s first match after the retirement of Park Ji-sung and Lee Young-pyo proved the Taegeuk Warriors have a long way to go before it can reach its full potential. Despite getting off to a lackluster start and finishing the international friendly against Turkey in a scoreless draw, Nam Tae-hee showed much promise in his national team debut.

“I was concerned leading up to the game with Park Ji-sung and Lee Young-pyo retired from the national team and Lee Chung-yong and Cha Du-ri scratched from the lineup due to injuries,” said national team manager Cho Kwang-rae in a post-match interview. “But with our young players working hard to maintain our pace throughout the match, I got the sense that we can develop into a stronger team.”

With right winger Lee Chung-yong fatigued and with bruising on his right knee, Nam Tae-hee of Valenciennes FC got the start in his national team debut, and up until being substituted out of the game for Choi Sung-kuk in the 69th minute, Nam stayed active down the wings and provided a spark on an otherwise stagnant Korean offense.

“We had set out to set the pace in the midfield with sharp passes and I think we merely reached 60 percent of our goal,” said Cho. “It was largely due to having four of our regulars out and a large number of new players in the lineup. If we continue to work on our young players and they adapt to our system, we can improve our overall level of play.”

Turkey came out aggressive and set the tone in the early goings of the match. With Emre Belozoglu and Hamit Altintop leading the attack, the Turks created several quality scoring opportunities early on. Korea, on the other hand, struggled to get their offense going and looked sluggish.

It was Nam who managed to turn the momentum of the game. In the 16th minute, Nam created a scoring opportunity down the right wing and his long-range shot in the 26th minute - Korea’s first shot of the match - looked well on its way into the net before it was tipped away by the Turkish goalkeeper Volkan Demirel.

“Skill-wise, Tae-hee is an excellent player,” said Cho. “He’s still young but Nam is a player who’s capable of playing the entire 90 minutes in the French Ligue 1 and that says a lot about what type of player he is. In making his national team debut as a replacement for the injured Lee Chung-yong, he played well. I expect more out of him in the future.”

Nam was tabbed as a top-flight prospect from an early age and was chosen by the Korea Football Association, along with current national team forward Ji Dong-won, to train with Reading FC’s under-18 club between 2007 and 2008. Nam was able to earn a contract with Valenciennes FC of the French Ligue 1 at the age of 18 and became the youngest Korean player to earn a contract with a European club. Listed a 175-centimeters (5 foot, 7 inches) and 73-kilograms (161 pounds), Nam lacks size but is a quick and versatile player who is capable of playing forward and all midfield positions.

“Nam is a player with great football instincts,” said U-20 national team manager Lee Kwang-jong. “Son Heung-min is capable of producing big plays but Nam is a skilled playmaker.”

Turkey’s manager Guus Hiddink, who managed Korea to the semifinals at the 2002 Korea-Japan World Cup, gave a positive assessment of Korea’s young squad.

“With many of its star players gone from its lineup, Korea is not yet at 100 percent,” said Hiddink. “Having watched them today, Korea has many young and talented players and their future is bright. If they manage to add two to three star players to the current lineup, Korea will be a formidable club.”

At the end of the 2002 World Cup, national team defender Hong Myung-bo and forward Hwang Sun-hong retired from the national team. Young players like Park Ji-sung, Lee Chun-soo, Seol Ki-hyeon and Ahn Jung-hwan, who were all groomed by Hiddink, were thrust into bigger roles with the national team. But it took another two years for the national team to make a successful transition. Korea suffered shocking upset losses to Vietnam and Oman in 2003 before reaching the quarterfinals at the 2004 Asian Cup in China and losing to Iran, 4-3.