Environmental art that does more than alter nature

Environmental art that does more than alter nature 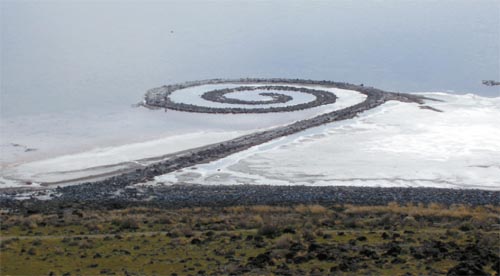 
When the water in the Great Salt Lake in Utah decreases below a certain level, a strange shape appears above the water’s surface on the northeastern shore. What is revealed is a long path made of stones and mud leading to a large coil closer to the center of the lake.

Is it a mysterious path left by the ancients as Stonehenge was? Were there religious rituals for the god of the lake in the center of the coil?

The structure is in fact an art installation called “Spiral Jetty” that was created by contemporary artist Robert Smithson in 1970.

Although some of the mystique about the sculpture disappears with the knowledge that it was constructed on purpose, the work still has as great an impact as an ancient monument.

Unlike other monuments, however, “Spiral Jetty” is not permanent. After several cycles of disappearing and reappearing it will naturally erode and eventually disappear for good.

Art critic Robert Hughes once said of Smithson’s work that to go and see it in a faraway and deserted place was like going on a pilgrimage. 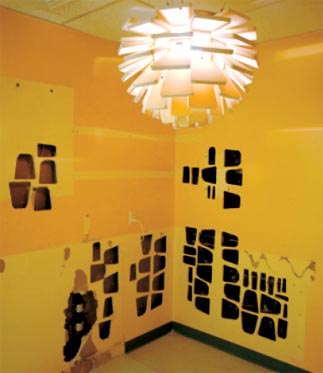 “You Only Have What is Here and Now” by Letha Wilson

Artworks that are installed in and influenced by nature - like “Spiral Jetty” - are called land art. Smithson was a major figure in land art, or “earthworks” as he called them. These works accept the natural attributes of their surroundings and change along with the environments in which they are found.

Land art had its beginnings in the late 1960s and flourished in the 1970s. It was largely influenced by anti-commercialization and environmental movements that arose as a reaction to the culture of mass production and mass commercialization dominant in the art world at the time, when even the most avant-garde works ended up as possessions of wealthy collectors.

In this way, “Spiral Jetty,” which could not be purchased or owned, stood as a powerful symbol of resistance to the commercialization of art.

It and works like it were also created in response to the Western concept of nature as something to be conquered.

This atmosphere of increased awareness about the environment led people to advocate for sustainable energy policies and natural living.

And in the late 1970s, the Gaia theory, which regards the Earth as one huge interconnected system, gained traction and helped popularize the idea of the connection between humans, other life forms and the elements. 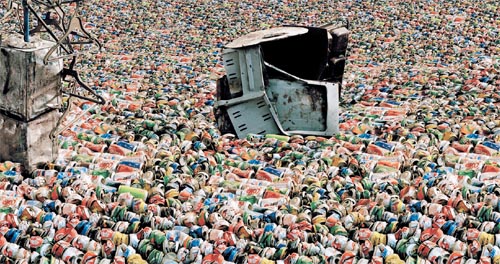 “You Only Have What is Here and Now” by Letha Wilson and “Metal Box” by Vivan Sundaram, as shown last year at the Greening Green exhibition at the Arko Art Center in Seoul. Provided by Arko Art Center


These days, although people still argue about the balance between economic development and environmental protection, most of the world is aware of the dangers of environmental destruction.

In the wake of all of this, many environmentalists have offered harsh warnings about the Earth’s future if sustainable forms of living are not found.

On the other side of the spectrum, however, are those who doubt whether global warming is really from air pollution.

That disbelief is not just a product of big businesses trying to make a buck, but in some cases also extends to people from underdeveloped countries who believe that environmentalism is another conspiracy propagated by Western countries to squeeze them out of the competition.

On both sides are apocalyptic visions of the future.

Artists have tried to capture these concepts in their works - whether it be film, visual art or performance.

At the Greening Green exhibition at the Arko Art Center last year, Indian artist Vivan Sundaram overwhelmed viewers with a photo of a large bundle of scrap iron that created an apocalyptic mood.

These days, it is not hard to find artworks with an environmental message, even at exhibitions not specifically limited to environmental themes.

Ironically, however, critics have pointed out that some works advocating for environmental protection are not exactly environmentally friendly and in some cases even make use of synthetic materials.

Even “Spiral Jetty” distorted the natural landscape in which it was created.

Most contemporary land art artists, however, try to seek ways to minimize the impact their art has on the environment.

Renowned English land art artist Richard Long, who is holding a solo exhibition at MC Gallery in Cheongdam-dong, southern Seoul later this month, is known for the creations he has made during his walks around the world.

To create these works, he collects small pebbles, twigs and dirt, rearranges them on the spot and takes pictures of the installations.

Meanwhile, some environmentalist artists create works to remind the audience that the acts of artistic creation and exhibition are also actions that produce waste.

American artist Letha Wilson made that point with an installation she showed in the Greening Green exhibition last year.

The installation consisted of two pieces: a chandelier and the material it had been made from. To create the chandelier, Wilson had cut pieces from partition walls. She then displayed the chandelier alongside the walls with the holes still visible.