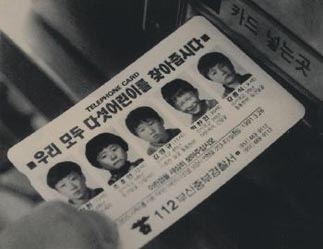 “Children” is based on a true story of five missing children in 1991. The real case remains unsolved. Provided by Lotte Entertainment

On a fine March day in 1991, five elementary school boys from a small village in Daegu strolled out to a neighborhood mountain to catch frogs.

They never came back.

As days passed, it became clear that the boys, second- to sixth-graders, were not out having fun. The search turned frantic as police, soldiers and villagers looked again and again for clues to where they had gone. The searches were broadcast live on television.

The children were found 11 years later, reduced to bones, buried in a village hill, after an anonymous caller tipped the police on where they should dig.

The story of the kids, dubbed the “frog boys,” is one of the country’s most painful and sensational cold cases. The statute of limitations on the case ran out in 2006.

The movie “Children” directed by Lee Kyu-man is a mystery thriller about a television producer, a psychology professor and a detective who investigate the case on their own. The plot is simple, and the narrative succeeds in keeping the audience focused on the story. Bits of humor give the audience relief when needed.

But the movie’s conclusion may be its trap. It is based on a true story, but the movie ends with the killer getting caught, combining reality with fiction in a not-so-natural way.

In the movie, five years after the boys’ disappearance, Ji-seung (Park Yong-woo), a young ambitious producer at a Seoul television broadcaster, is sent to Daegu after he is caught fabricating parts of a documentary. He is determined to get a scoop on the mystery case and proudly return to Seoul.

He meets a psychology professor, Woo-hyuk (Ryu Seung-ryong), who, using his psychology theory, points to the parents of one of the missing boys as main suspects.

Ji-seung and Woo-hyuk join hands to try to prove that Jong-ho’s father and mother killed the children. But their attempt clashes with Kyung-shik (Sung Dong-il), a veteran detective from a local police station who is the lead investigator of the case. His intuition tells him that a stranger who is familiar with the village committed the crime, not the parents.

Ji-seung and Woo-hyuk ransack Jong-ho’s house, digging out the stone floor and emptying the toilet, hoping to find the buried bodies of the children, with scores of village residents, reporters and police officers watching.

But the search ends in vain, and the two are slammed for insulting the parents.

The movie then flashes forward to 2002 when the bones of the five children are found at a hill near the village.

The film’s overall narrative is easy to follow, showing how the investigation was conducted and failed, but the link between Woo-hyuk and Ji-seung seems less plausible, as the audience has to wonder why the duo are so obsessed about their initial suspicion of the parents.

When Ji-seung confronts the murderer who is working at a slaughterhouse, tension peaks. Chills run through the body in an ensuing fight between them. But at the end, finding the murderer when the actual case remains unsolved hurts the sense of reality.