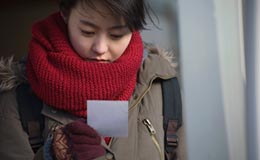 “Re-encounter” drew favorable reviews from critics and audiences alike when it was screened at film festivals last year.

The two fall in love at 18, but when Hye-hwa reports she is pregnant Han-soo disappears to Canada.

Five years later, Han-soo shows up with the news that their child, who Hye-hwa was told died in childbirth, is alive and has been adopted.

Hye-hwa is struck upon learning the news, and she is forced to relive the pain of her past, but in the end she decides to search for her child.

Director Min Yong-keun, who also wrote the script, took a risk in deciding not to rely upon top stars to tell his story.

The actors’ talents shine through and their performances were well-received by film critics.

The movie hits theaters on Feb. 17. The Korean title of the film, “Hye-hwa, Dong,” is not related to the Hyehwa-dong neighborhood in central Seoul.

Directed by Alister Grierson and produced by James Cameron (creator of Titanic and Avatar), this 3-D action-thriller follows the journey of a team of underwater cave divers who are on an expedition to the least accessible earth caves in Papua New Guinea.

When they are trapped in a tropical storm, their only way out is to travel down into the underwater caves following the course of the river leading to the ocean.

However the tropical storm forces them to alter their path and confront raging waters and unexplored caves.

Sanctum uses 3-D technology to portray the underwater scenes so that the action is captured clearly and takes the audience on an action-filled journey.

Starring Natalie Portman and Ashton Kutcher as Emma and Adam, this is a romantic comedy portraying two friends who are trying to keep their relationship strictly physical.

Adam, an assistant on a television show, woke up one day in Emma’s apartment, and realized that she was his crush since they had a summer camp together.

Adam attempts to pursue this relationship, but Emma is more interested in a “no strings attached” relationship.

Emma, a doctor, is busy with her schedule and is afraid of commitments with the opposite sex. She prefers being in a “friends with benefits” relationship with Adam, meaning no conditions or expectations.

It is only a matter of time before the question becomes who falls for the other first.

The movie has real-life scenarios, and Portman and Kutcher’s chemistry make it all the more credible.

“Tangled” is the latest release from Disney and is riding on high expectations as the 50th animated feature film from the studio.

With a return to classic Disney storytelling, “Tangled” is a romantic musical fairy tale inspired by the Brothers Grimm’s Rapunzel.

After being endowed with magical powers that can restore youth, baby Rapunzel (Mandy Moore) is kidnapped by Mother Gothel (Donna Murphy) and locked away in a hidden tower. Now a curious and determined teenager, Rapunzel longs to escape and see the world.

Her opportunity arises when a charming bandit (Zachary Levi) scales her tower. Together, they escape and uncover the mystery of the floating lights.

“Tangled” is the most expensive animated film ever produced by Disney and is set to become the third-highest grossing Disney film after “The Lion King” and “Aladdin,” thanks to high-grossing weekends in the U.S. and worldwide.

The film has also been nominated for an Oscar in the Best Original Song category.