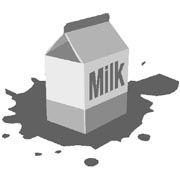 Hippocrates, the Greek philosopher-doctor who wrote the Hippocratic oath, considered milk a “complete food.” He preached that food was a drug for curing disease, saying that “diseases that cannot be cured by food cannot be cured by medicine,” so for him, milk was one of the best remedies for health. For that reason, perhaps in Western civilization, milk is considered essential to survival. It was no coincidence, then, that Winston Churchill, once a prime minister of Great Britain, said that the greatest investment that society could make in its future was providing milk to children.

The history of milk dates back to around 4,000 B.C., based on wall paintings found along the Nile River in Egypt that show people milking cows.

In Korea, too, there is historical record of milk consumption. In the “Heritage of the Three States,” the word “rak,” which means milk products, appears and there are also records that milk was used to cure patients of ailments. It is said that a state dairy farm called the “milk cow farm” was established during the reign of King Wu of the Goryeo Dynasty. And according to the records of Dongbang Sesigi, during the Joseon Dynasty, the medical office of the royal court prepared gruel and other food using milk, to serve to the king, courtiers and patients.

It was only after national liberation that milk became available to ordinary people. Powdered skim milk was imported in large quantities as a part of U.S. food aid. After the end of the Korean War, relief goods provided by the United States and milk products from the U.S. Army PX became major sales items for peddlers. At the time, a milk product called “Carnation” represented all milk products. And when people were suffering from food shortages, milk products were given out to help combat malnutrition. When domestic dairy production businesses began to produce milk in full in the 1960s, milk became a health food for the general public.

Now, milk is suffering from the aftermath of foot-and-mouth disease. It is reported that the amount of milk thrown away by dairy farms located near foot-and-mouth disease outbreaks amounts to more than 200 tons per day. That amounts to one million 200 milliliter packs. It is even said that it is difficult to find ways to dispose of the milk because it is being thrown away in such large quantities. It is a pity that milk has been so degraded. When will it resume its place as the “perfect food”?