How local gov’ts blow their budgets

How local gov’ts blow their budgets

Sancheong Museum, in Sancheong County, south Gyeongsang, which was built to exhibit prehistoric artifacts, has been closed for five years, ever since its establishment. However, one manager has been employed to administer the building, which has become a symbol of tax waste. By Kim Sang-seon


Since its completion in April 2007, a large “closed” sign has hung at Sancheon Museum’s front entrance. The two-story, 2 billion won ($1.7 million) tile-roof building in Sancheong County, South Gyeongsang, has never been open to the public.

On top of the construction costs, the shuttered museum has accumulated millions of won in electricity, water and management bills.

“You guys took billions of won from our already insufficient budget to build this museum, and it still remains closed despite receiving a completion permit, not to mention hiring a manager who works 253 days a year in an empty building. If the money was from your own pockets, would you have spent it like this?” Kim shouted at Jo Seong-je, chief of culture and tourism.

Across the country, local government budgets have been squeezed by similar projects.

The 13 billion won Taebaek Historical Theme Park, built in Gangwon in 2006, receives only 12 visitors a day. A 2.8 billion won exhibition hall in Busan is on the verge of being demolished only two years after being erected. And opposite Sancheong Museum sits a 1.9 billion won center for intangible cultural properties that has been empty for two years.

Critics blame the wasteful spending on city mayors and county governors who rush to complete “legacy projects” without doing their homework. Political will to support these white elephants often evaporates after they leave office.

“Most city mayors and county governors believe they have to establish something during their term in office. So there are numerous such facilities that close within three years of establishment,” said Kim.

After the wasteful spending came to light, the Ministry of Public Administration and Security promised this week to closely examine accusations of budget waste.

The ministry said it will investigate all 244 governing bodies across the country this month, keeping an eye out for projects experiencing delays and cost overruns. It will especially take a look at recently completed museums, theme parks and exhibition halls to make sure they were not established without thorough feasibility studies.

“Such tax waste should have never happened and it should never happen,” said Public Administration and Security Minister Maeng Hyung-kyu after being reached for comment. 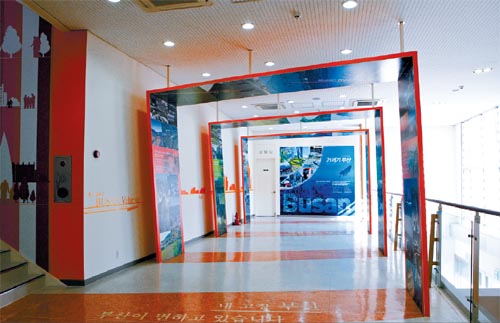 
Both Sancheong Museum and the traditional Korean-style house that hosts intangible cultural properties just across the way are part of a 32,000-square-meter (7.9 acres) Plant and Sculpture Park, which has been open to the public despite the fact that two of its multibillion won facilities have never seen a single paying customer.

After completion of the museum, only 46 relics filled its halls, which is far short of the museum registry standard of 100 pieces.

“I wasn’t aware that a minimum of 100 relics are needed to establish a museum,” said former Sancheong County Governor Kwon Cheol-hyeon. “Efforts should be made [by the current local government] to meet the requirement either by excavating more relics by receiving additional funding.”

Said Jo, the culture and tourism chief: “Wooden sculptures from Sancheon County had been planned to be displayed at the house. It’s just taking a while.”

When a reporter visited the park on Feb. 5, there were no visitors.

“Residents nearby sarcastically comment that the museum should be leased for use as a restaurant and that the traditional house be converted into a Buddhist temple,” said a man surnamed Kim, 52, who runs a gas station next to the park. “The problem is greed from local government heads. They want to establish something during their term. But I think supporting farmers would be a more appropriate policy.”

Sancheong County has an annual budget of 321.2 billion won to spend on its 35,000 inhabitants, 30 percent of whom are older than 65. Despite rising welfare costs, the free-wheeling government has built 19 cultural facilities, only seven of which are open. Two have already been shut down, while 10 are still under construction.

“The heart of the matter is the irresponsible [spending] of local governments,” said Lee Won-hee, a public administration professor at Hankyong National University. “The prevalent attitude of squandering money because it’s not from their own pockets is a moral laxity that has become rampant in current local governments.”

Taebaek Historical Theme Park in Taebaek, Gangwon, is a dreary place. Hardly anyone visits the 130,000-square-meter site because there is nothing there except two exhibition halls.

When the special reporting team visited the park two months ago, only a few visitors were spotted.

“I thought it would be a theme park where you can have hands-on experience, but there’s nothing to experience,” said Kim Ok-ju, 48, who visited the park with her husband and child. “The park is deserted and has poor transportation.”

Yoon Soon-seok, a theme park administrator, explained that the park has good days and bad.

“Some days, there are more than 100 visitors,” said Yoon.

But on average, the park - which sits on a plot of land big enough for 18 soccer fields - saw an average of 12 people per day last year. That was good enough for just 2.5 million won in revenue, one third the income the park gained in 2006 when it was established. Meanwhile, the county spends 80 million won to keep it open, which does not include the wages of five full-time civil servants.

The 13 billion won park was intended to attract tourists and preserve the area’s mining history. There was no private investment.

Lee Mun-geun, chairman of Taebaek City Council, admitted that doubts on the feasibility of the project existed from the beginning.

“We did have doubts on economic feasibility before we made the final decision,” he said, adding that they hoped the park would turn the sleepy country into a popular tourist destination.

“Local governments get especially fired up to start a project using government expenses despite having doubts about business values,” he added.

Undeterred, Taebaek invested another 7.5 billion won in 2009 to expand the unpopular theme park.

“The expansion was a waste of money,” said a Taebaek City Council civil servant, who requested anonymity. “Expanding the park when there is no demand for it won’t change a thing.”

Just a bit more than 300 kilometers (186 miles) south of Taebaek, an exhibition hall in Busan is slated for demolition two years after it was constructed. The 2.8 billion won structure had been a promotional hall for the Busan New Town housing project.

The Korea Land and Housing Corporation (LH) and Busan’s Yeongdo District are still passing the buck on who should shoulder blame for the wasted funds.

After the exhibition hall was built in April 2008, LH designated it as a promotion center for the construction of Busan’s New Town, while the district office provided the land for free. But after the free-lease period expired last month, LH informed the district office that it would now be responsible for the hall’s management. The district rejected the proposal because it couldn’t afford the maintenance costs.

At the time of its construction in 2008, the district’s representative was the speaker of the National Assembly.

“Such a large-scale project was possible because district representative Kim Hyong-o had exercised authority,” said a city hall official on condition of anonymity.

Said Gwon Hyeok, a Yeongdo District Council member: “This whole thing is just a waste of the public’s tax money.”