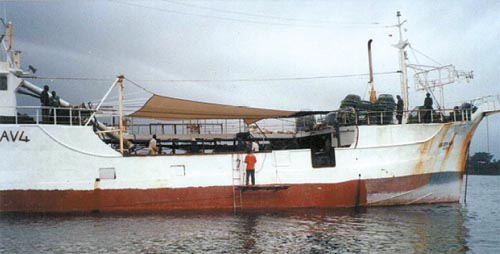 The crab boat Geummi 305, released by Somali pirates on Wednesday, is shown here anchored in Mombasa, Kenya, before it was hijacked. [YONHAP]


Somali pirates released the Geummi 305 Wednesday afternoon Korea time, ending the four-month-long seizure of the Korean crabbing boat and its 43-man crew, the Ministry of Foreign Affairs and Trade said yesterday. The crew, which included two Koreans, were all released unharmed, the ministry said.

The release, coming less than a month after the rescue of another Korean vessel from Somali pirates, was so sudden that Seoul is investigating its circumstances. Apparently, no ransom was paid.

The Busan-based company that owned the 240-ton crabbing trawler apparently went bankrupt after its hijacking. It owned no additional ships.

The Geummi 305, also known as the Golden Wave, is now heading to Mombasa, Kenya, under the escort of a European Union war vessel, the ministry said in a press release. The pirates kept the ship and crew in Harardhere, Somalia, a known pirate base.

The Finnish escort was requested by Korea’s antipiracy Cheonghae Naval Unit, the ministry said. The Finnish vessel encountered the Geummi 305 at 8:16 a.m. yesterday, Korea time, in international waters off eastern Africa and has provided it with fuel, food, basic maintenance and medical checkups for the crew, the ministry said.

The crew is generally in good health, except some Kenyan crew members are suffering from minor diarrhea, the ministry said.

“We expect the Geummi 305 will be able to get to Mombasa next Wednesday,” said an official of the ministry.

The Geummi 305 was hijacked while fishing in waters off Lamu, Kenya, on Oct. 9. Apart from Korean captain Kim Dae-geun and chief engineer Kim Yong-hyun, two Chinese and 39 Kenyans were aboard.

There was no word from the pirates on why they decided to release the boat and its sailors, but the ministry speculated that they realized the prospect of getting a ransom was dim and the cost of feeding and keeping the crew wore them down.

Andrew Mwangura, coordinator of the East African Seafarers’ Assistance Program, the Mombasa-based piracy watchdog, echoed the ministry’s view in an interview with Yonhap.

It is yet to be confirmed either by the pirates or the Korean government whether ransom was paid. The Korean government didn’t pay one, the ministry said. Kim Jong-gyu, a Korean shipping agent based in Mombasa who negotiated with the pirates, told the JoongAng Ilbo yesterday he did not give them money. But they took everything they could sell from the Geummi 305, including its anchors, he said.