A barbershop that’s a cut above the rest

A barbershop that’s a cut above the rest 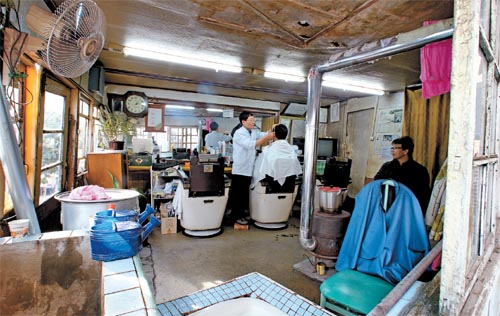 Hairdresser Lee Nam-yul cuts a customer’s hair at Sungwoo Barbershop, which was founded by his grandfather in 1927. The business has survived thanks to a combination of high quality service and a clientele that includes politicians and prominent businessmen. By Choi Jeong-dong


Hairdresser Lee Nam-yul, 62, says things were better back in the old days.

“In those days, we were always crazy busy around the Lunar New Year holiday. Four hairdressers had to cut more than 100 people’s hair - all in one day,” Lee recalled. “It was like that for 10 or so days and by the time nightfall came, we were physically wrecked.”

Lee has been a hairdresser for 46 years now. At 16, Lee became an apprentice under his father and took over the family business in 1984. Sungwoo Barbershop, which lies within Manli Market in Yongsan District, central Seoul, was founded in 1927 by his grandfather.

With this long family heritage, Sungwoo Barbershop has been featured in many articles and television shows over the years. Lee said that after about 1980, however, he saw his customer base shrink suddenly.

“There was a sudden burst of competition because many ex-criminals, who had learned how to cut hair in prison, were starting to open up barbershops after they got out,” he said.

Lee added that at the time, barbershops had also started providing illicit sexual services, which caused many regular customers to start going to hair salons or bathhouses to get their hair cut in order to avoid those kinds of shops.

Even so, the shop was bustling with action when I visited on a recent afternoon. When I arrived, Lee was cutting hair and said he’d been so busy that he’d skipped lunch.

The building housing the shop looked quite humble - it is a rebuilt thatched-roof house that is more than 200 years old.

The scene inside the shop, however, was miles away from other such barbershops around the city that seem vacant for most of the day.

When asked how he rates his skills as a hairdresser, he answered without a moment of hesitation that nobody in Korea could beat him.

Lee says that with first timers, he takes care to memorize a particular haircut on the customer.

“You can’t be a hairdresser if you are stupid,” he laughed. 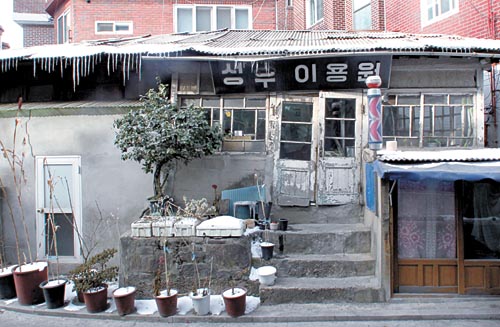 Sungwoo Barbershop, which lies within Manli Market in Yongsan District, central Seoul, is housed in a thatched-roof house that is more than 200 years old.


Many of his more than 200 regulars are famous politicians or business leaders. Roe Hoe-chan, former representative of the Democratic Labor Party, has visited the barbershop roughly every 20 days for around seven years. Around two-thirds of the regulars come from regions outside of Seoul.

To maintain top physical form for his job, he says he never drinks alcohol or smokes, worried that those habits will make his hands tremble. He adds that he doesn’t eat meat in order to keep a clear head.

Every morning at seven, Lee goes to the shop, cleans up and greets customers. He closes the shop every night at nine. Despite the shop’s popularity, Lee says he hardly takes on more than 10 customers a day because every haircut, when “done right,” takes more than an hour. Even so, the price for his haircuts is still affordable, at 10,000 won per person. A shave and shampoo costs an extra 10,000 won.

Over the years, Lee says he has received numerous offers to work elsewhere - including a handful of offers from top hair salons in wealthy southern Seoul. But he said no each time.

“I wanted to keep what is sacred,” he said.