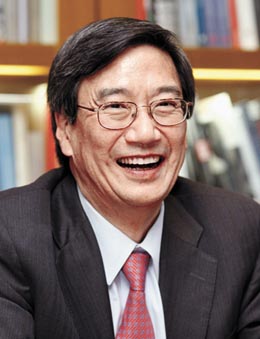 When reporters caught up with biologist Peter Kim while he was in town this week to accept an honorary doctoral degree from Postech University, he said a long term investment in science is the best way to bring a Nobel Prize to Korea.

Kim, himself considered the closest Korean to winning a Nobel Prize in science, acknowledged that Koreans are impatient about winning the award.

“I know that Koreans are eagerly looking forward to a Korean Nobel Prize [in science] winner,” Kim said. “I see many theses written by Koreans in top journals these days. But [university administrators] should not be satisfied with those achievements alone, but should make longer-term investments to foster talented human resources.

“Winning a Nobel is not something that happens overnight,” he added.

Kim said, however, that he is not preoccupied with winning a Nobel Prize.

“To be honest, I don’t care much about a Nobel Prize. It’s not something that’s easy to attain - no matter how hard you try,” he said.

The 53-year-old Korean-American is in charge of research and development at New Jersey-based Merck.

He gained world-wide attention in academic circles for his AIDS research when he was working as a biology professor at the Massachusetts Institute of Technology in the mid-1990s.

Kim has published more than 30 theses in influential science journals such as Nature and Science, and he has had a storybook ascent to the top of the world’s second-largest pharmaceutical company.

He was born and raised in the United States by his single, working mother, who worked as a high school science teacher.

“Society needs to support students who are eager to pursue higher education, but do not have the economic means.”

Kim also said it is important to provide an environment in which students can be creative while learning.

A hot topic in Korea of late has been the trend of bright students choosing medical school over science and engineering fields.

But Kim does not see that as a problem.

“In terms of career path, what really matters is that they have the courage to select something that interests them,” he said. “If they are interested in research and development after graduating from medical school, they can always choose basic medical science and help many people.”

On the topic of scientists and engineers in Korea not wanting their children to follow in their footsteps, Kim said he prefers to leave it up to his children.

“My eldest child is studying chemistry in college and my two other children are also interested in science. If they choose science, I wouldn’t object.”