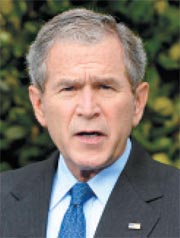 The Nihon Keizai Shimbun said the former United States president made the confession during an exclusive interview in Texas.

In the interview, Bush said the lack of trust in Kim led him to remain pessimistic that the U.S. and North Korea would reach a comprehensive agreement on the North’s nuclear weapons program during his eight years in office, which ended in January 2009.

He also said he did not believe stabilized bilateral relations between Washington and Pyongyang would have been possible before he left the White House, the paper said.

The interview was published three days after numerous news outlets reported on Donald Rumsfeld’s memoirs, in which Bush’s Secretary of Defense from 2001 to 2006 wrote that he saw little chance of the North giving up its nuclear weapons as long as Kim remained in power.

Rumsfeld also wrote that he did not believe the six-party talks on North Korean denuclearization, initiated in 2003 and currently stalled, would ever work.

Bush told the Nikkei he wanted to keep the six-party talks going while in office, but still wanted to destroy the North’s plutonium-based nuclear production sites at Yongbyon, suspected to have produced materials for at least six nuclear weapons.

Explaining that action, he told Nikkei there had been some progress in dealing with the nuclear issue and his administration wanted to further accelerate Pyongyang’s denuclearization.

Bush said North Korea’s nuclear facility in Yongbyon is similar to a suspected nuclear power plant in Syria, which was attacked by Israel in September 2007, backing the suspicion that North Korea and Syria exchanged nuclear technology.

Bush dodged comment on further suspicions that the North transferred its nuclear technology to Iran and Myanmar. He simply said there is a concern about nuclear proliferation by North Korea.

In November, North Korea showed a visiting U.S. scientist a new uranium enrichment facility, triggering fear that it was mastering the second fuel for nuclear weapons beyond plutonium.

U.S. Director of National Intelligence James Clapper said in written testimony to the U.S. House of Representatives on Thursday there is a “clear prospect’’ that the North has built other uranium-enrichment-related facilities.

Bush also said in the interview that China was initially passive in the six-party talks, but the U.S. talked it into assuming chairmanship after saying Japan may try arming itself with nuclear weapons if the North’s nuclear security threat continued.