KTX train off the rails

KTX train off the rails 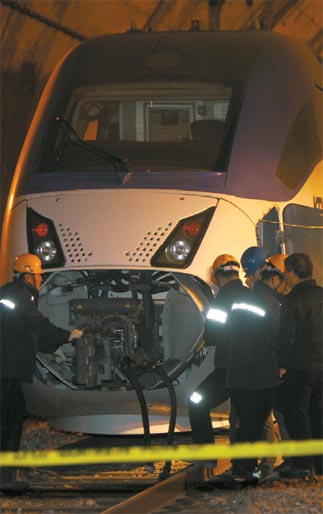 Officials of the state-run Korea Railroad, Korail, inspect a high-speed KTX train bound for Seoul from Busan that derailed near Gwangmyeong Station in Gyeonggi, yesterday, forcing Seoul-bound KTX lanes to shut down. The derailed train, which departed from Busan at 10:45 a.m., was supposed to arrive at Gwangmyeong station at 1 p.m. but the rear six of its 10 cars derailed 270 meters (885 feet) before reaching the station. No casualties were reported, according to Korail. All 147 passengers had to walk to the station, five to 10 minutes on foot. Meanwhile, passengers crowded Seoul Station to purchase alternate tickets or receive a refund for trains that couldn’t reach the capital to pick them up. [YONHAP]