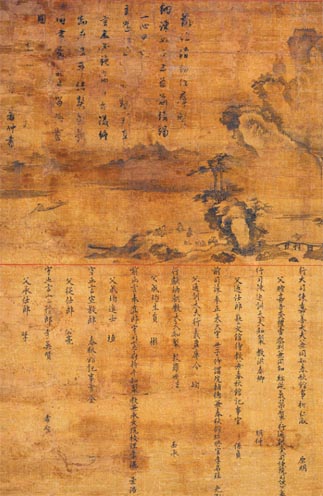 This painting was intended to commemorate an official gathering of the members of the Saganwon (Council of Censors) during the mid-Joseon Dynasty (1392?1897). Although the painting shows that this is a relatively small-scale meeting that involved drinking, as suggested by the wine pots, members at the Saganwon were some of the most important people during the period. The council worked with the king to make political decisions. The mountain peaks and hills arranged in the painting, the ample use of short lines and dots, and the presence of pines are elements utilized by An Gyeon, one of Joseon’s most influential painters and a member of the Saganwon. However, the artist of this painting is unknown. The postscript was written by Seong Se-change in the 1540s.