Comedian breaks down science of humor

Comedian breaks down science of humor 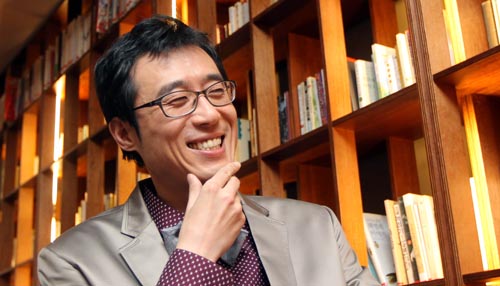 Comedian Lee Yoon-suk’s new book “The Science of Laughter” goes all the way back to primitive times to find the basis of laughter. By Byun Sun-goo


Comedian Lee Yoon-suk, often called by his nickname “Korea’s weakling” due to his frail-looking physique, released his first book “The Science of Laughter” late last month.

This rather scholarly title seems apt for Lee, well-known throughout the entertainment industry as a bookworm, and one of the few Korean comedians that holds a doctorate. He has also been the dean of the Seoul Arts School’s broadcasting division since 2009.

Since receiving nationwide attention through a comedy contest on TV network MBC in 1993, he has made a name for himself in the entertainment industry for his dry and refined brand of comedy that diverged from slapstick humor that was prevalent at that time.

Unlike books written by other comedians telling their tales of success, Lee’s book aims to analyze laughter in terms of its historic, psychological, biological and neurological basis.

When the JoongAng Ilbo met up with Lee in a cafe in Seoul, he noted that he read a lot of science books as a child and has noticed over the years a dearth of scientific study on laughter.

“Comedy programs are often regarded as inferior in local TV broadcasting [compared to the drama or documentary formats] and this tendency has also been reflected in academic fields. It made me feel I had to take action,” said Lee.

“Having been a comedian for 17 years, I wanted to realize my identity in my profession and satisfy readers by writing this book,” he added.

In the book, Lee scientifically breaks down the success of today’s comedians. 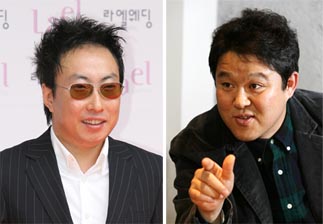 Lee explains that the loud and aggressive prank-comedy characterized by comedians Park Myung-soo and Kim Goo-ra stems from behavior of human’s ancestors hundreds of thousands of years ago.

Lee’s book posits that there is a connection between primate behavior, specifically aggressive but harmless “games,” and some comedians’ playful aggressiveness on television.

Lee goes into more detail, though, hypothesizing that the root of Park and Kim’s success is embedded in Korea’s social and political circumstances. The comedians’ brand of humor should be analyzed through the context of Korean society’s sudden democratization and economic development. During Korea’s dictatorial period that encompassed much of 1953 to 1989, what Lee dubs “dumb” comedy was prevalent due to societal constraints on free speech. But since the dictatorship came to an end, broader brands of comedy have been popularized.

“During the dictatorship period in Korea, people only laughed at comedy featuring ‘dumb’ characters, because everyone was what I call a social weakling. But nowadays, because everyone is relatively better off and laid back, they have a higher tolerance for other kinds of comedy,” said Lee.


Humility the key to humor

The first reason, he figured, was their humility. Their fame did not originate from humor or speaking skills. Lee said that laughter can be explained through a “superiority” perspective, in which comedians often times satisfy people’s sense of superiority by degrading themselves or building up their subjects.

Yoo Jae-seok became known for building up and complimenting his guests.

Comedians Lee Kyung-gyu and Kang Ho-dong’s aggressive humor also agrees with audiences because their short-temperedness assures the viewers that they are superior to these comedians.

Lee’s book provides insight into entertainment programs “Infinite Challenge” and “A Man’s Worth.”

According to Lee, the programs share a common narrative of seemingly inferior celebrities striving to improve. “Comedies now not only have to satisfy audiences’ sense of superiority but also need to satisfy their sense of empathy as well,” Lee said.


Tough for pretty women to be funny

The way “The Science of Laughter” approaches gender is striking. Despite the long-prevalent bias in Korea that joke-telling is part of the male role and women’s role is to laugh at jokes told by men, Lee says those times are long gone. He refers to Lee Gyeong-sil and Jeong Sun-hee as comedians who utilize the “resistance force of laughter.”

“Every woman wants to look pretty and sweet. But as a comedian, they have to give up on that. The aggressive pranks made by male comedians are not easily accepted by the public when they are made by their female counterparts,” he said.

“In that sense, I would like to cheer on my fellow female juniors as well as veteran comedians, Lee Gyeong-sil and Jeong Sun-hee.


The future of comedy

Lee is not looking past Yoo Jae-seok, Kang Ho-dong or Lee Kyung-gyu. “They are like the audiences’ family. I think that no one can replace their place unless they retire,” said Lee.

Lee acknowledged his own problems regarding his rather subtle approach to humor, which at times do not meet the demands of the public.

“Although I am not the best comedian, the fact that people accepted me positively for my consistency makes me feel lucky. I think that there is no better way of staying healthy than laughing out loud,” said Lee.

“A person who laughs more than Samsung Electronics Chairman Lee Kun-hee is one with a successful life.”