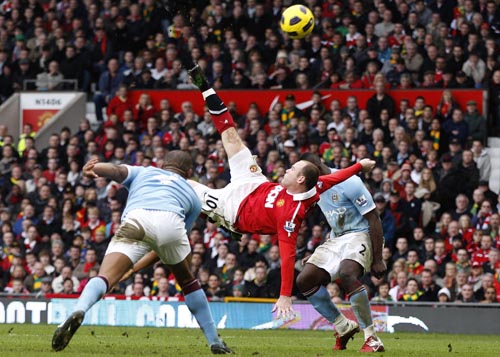 
LONDON - Wayne Rooney scored one of the goals of the season as leaders United won the 157th Manchester derby 2-1 and all but ended the hopes of neighbors City of landing the Premier League title.

The England striker netted with a brilliant overhead kick 12 minutes from time to decide a thrilling match that had been in the balance.

Nani had given the home side the lead four minutes before halftime, latching onto a pass from Ryan Giggs to score his ninth league goal of the season.

But City thought they had grabbed a point when a wayward shot from Edin Dzeko deflected off the back of teammate David Silva, who was credited with probably the luckiest goal of his career.

City will be disappointed to leave Old Trafford with nothing, because they gave their all and will rightly argue that they were the better side in the first half.

But they failed to take their chances as United made it 13 wins out of 14 at home in the top flight this season with a goal that took the breath away.

“Nine times out of ten they fly over the bar,” Rooney said. “I’d scored one in school. I think it’s my first one since I started playing as a professional so I am delighted.”

So was his manager. Sir Alex Ferguson said: “I haven’t seen anything like it, that’s for sure. Unbelievable, stunning. The thing about that goal is that Nani’s goal will be forgotten and that was a fantastic goal.

“What I need to get out of Wayne and [Dimitar] Berbatov is performances away from home. They’ve not been as good as they have been at home.

“That’s a quandary for me, because the ability that those two have, they really should be dictating games away from home, because when they do, it will make a hell of a difference to Manchester United.”

Berbatov, in fact, was left on the bench at the start as the Scot opted instead for a system he often uses in big games, with Rooney as a lone striker and a powerful five-man midfield.

The first meeting between these two sides back in November had produced a sterile, goalless draw with very few clear-cut chances.

So it must have come as a huge surprise to Silva when he was presented with a gilt-edged opening inside the first four minutes.

The Spaniard combined superbly with Yaya Toure and former United favorite Carlos Tevez but pulled his angled shot wide of the far post with only Edwin van der Sar to beat.

United responded with Nani firing just over the bar from long range, but it was the visitors who carried the greater threat early on.

Yaya Toure headed just over from an Aleksandar Kolarov free-kick after escaping the attentions of Patrice Evra at the far post and the nervousness transmitting from the stands was an indication of just how much the title favorites were struggling.

Darren Fletcher headed straight at Joe Hart before United grabbed the opening goal against the run of play.

Rooney flicked on a long punt forward from van der Sar and Ryan Giggs helped the ball into the path of Nani, who showed great touch to bring it under control before sliding a shot beyond Joe Hart’s left hand.

City had to weather a United storm to avoid going into the break two goals in arrears, but they gathered their composure at the interval and came out looking for an equalizer.

A goal-bound header from Micah Richards was cleared by Rooney before Silva wasted another opening when he worked his way into a good position only to shoot straight at the goalkeeper.

The Spaniard did find the target after 65 minutes but he knew little about it. Dzeko’s shot was heading 15 yards wide but it hit Silva in the back and deflected into the corner of the goal that van der Sar was not guarding.

If that goal was pure fluke, the winner was utterly brilliant. Nani crossed from the right and Rooney met the ball perfectly with a spectacular overhead kick that found the top corner of the net.

The United striker has struggled for form early in the season, but this was the clearest indication yet that he could be coming back to his best for the crucial part of the campaign.

City are now eight points behind United and they have played a game more. “It’s very difficult now (to win the title), like one week ago when we were eight points behind, but we shall continue,” City manager Roberto Mancini said.

“I thought at 1-1 we had a chance to win this game, but what a fantastic goal Rooney scored, it changed the game, but we absolutely didn’t deserve to lose.”