The tragedy of the starving artist

The tragedy of the starving artist 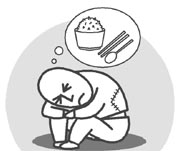 The conventional image of an artist is close to a bad-tempered eccentric. The passage in Park Nam-cheol’s “Practice to Be a Poet” explains it well: “Artists go around without washing their face, with the collar of their coats turned up and without minding dandruff from their shaggy hair on their suit.” From a poet who mistook a perfume bottle on a friend’s dressing table for liquor to a painter who got so depressed that he cut off his ear, there is a long queue of weird anecdotes about outstanding artists.

The idea that artistic accomplishment and eccentricity are correlated originates from ancient times of the West. The theory derives from Plato’s “Ion,” which says that an artist has no real skill but is like a soothsayer or prophet who is divinely possessed. That’s why they admire the works of Renaissance masters as “the work of God.” Verna Krieger, a German art historian, said in her 2007 book “What Is an Artist?” that an artist repeats the pattern of working like mad and being idle and that there were countless episodes related to unethical behavior, social deviation, intemperance, unmarried life, homosexuality, etc.

Even poverty and loneliness make them seem mysterious. “Poor hungry genius” has been the most attractive image of artists since the Romantic Era. In the history of Korea’s fine arts, there are also quite a number of “poor geniuses” and, coincidentally, the prices of their works are very high. Lee Jung-seop, a famous painter and the author of “1916-1956 Letters and Paintings,” wrote: “I led a life of eating two bowls of noodle with soy source on a lucky day. Otherwise, I had only one. It got even colder at night in my heatless nine-by-nine foot room, in which I had to sleep alone.”

In reality, however, poverty is nothing but pain that obstructs artists’ creativity. Recently, a screenwriter in her 30s was found dead in her rented room. And at the end of last year, a member of an independent rock band died of brain hemorrhage in his rented basement room. The economic hardships of artists derive from a social contradiction that gives them unfair treatment: Singers get only a few scores of won for their songs, and screenwriters aren’t paid for their script if it doesn’t get made into a film. As long as such contradictions persist, it is difficult to expect artists to demonstrate their real talent. The era in which artists could become geniuses with only passion and obsession may now be over.