DP decides to go back to Assembly, skip MB summit

DP decides to go back to Assembly, skip MB summit 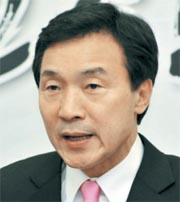 Democratic Party lawmakers decided yesterday to return to the National Assembly to end the political deadlock that has frozen legislative activity, while the party’s chairman rejected President Lee Myung-bak’s invitation for a face-to-face meeting, calling the offer “insincere.”

The Blue House yesterday criticized the Democrats for skipping the summit that was supposed to smooth out relations between the two sides. The parties had squabbled for days on when the meeting would be held.

In an urgently called press conference yesterday, DP Chairman Sohn Hak-kyu attacked Lee for “turning a blind eye and a deaf ear to the people’s hardships,” adding that he has no more expectations from the president.

“The Lee administration is reluctant to talk with the opposition parties,” Sohn said. “I am not sure what he is so afraid about. Is it really that hard to apologize for having railroaded bills at the National Assembly?”

Last week, the Democratic Party said a precondition for the meeting was an apology from Lee for the GNP’s ramming through of last year’s budget on Dec. 8 in the National Assembly.

“We will return to the National Assembly,” Sohn said. The main intention, he said, would be to challenge the policies of the Lee administration, which he called “anti-working class.”

The Democrats said their main priorities in a special assembly session would be to stop the foot-and-mouth disease outbreaks and determine who was responsible for the crisis; ease inter-Korean tensions; challenge the plan to deploy troops to the United Arab Emirates; fight against the Korea-U.S. free trade agreement; and come up with measures to ameliorate the “livelihood crisis,” including skyrocketing sovereign and household debt as well as rising rents.

DP’s floor leader, Park Jie-won, also held a press conference confirming the party’s decision to return to the legislature. Park said he would talk to his GNP counterparts to come up with a legislative timetable.

After Sohn’s press conference, the Blue House issued a statement criticizing him for linking the summit with the resumption of legislative activity.

“The opposition party’s return to the legislature is not a subject for political negotiation,” a senior presidential official said. “It is a duty of a responsible political party.”

Another Blue House official also said it was inappropriate for Sohn to attach political conditions to the summit, adding that the presidential office has worked to arrange the meeting since the end of last year, even before Lee made public his offer during a live television appearance on Feb. 1.

“The DP is responsible for sinking the summit plan by attaching preconditions such as the apology,” he said. “I told the DP that the budget bill incident can be brought up during the summit and the president wasn’t likely to defend it. But the DP insisted on making preconditions, destroying the situation.”

The Grand National Party yesterday said it welcomed the DP’s decision to return to the National Assembly, although it called it “belated.”

“While waiting for the DP’s return, the GNP has picked 72 urgent bills linked to people’s livelihood,” Ahn Sang-soo, the GNP chairman, said. “They include bills concerning education at grade schools, boosting employment for the disabled and housing subsidies. There are also other mounting issues such as stabilizing inflation and housing prices as well as the foot-and-mouth crisis.”

“It is lawmakers’ duty to attend a National Assembly session, but the Democrats made the situation out as if they were making a great concession,” Park Sun-young, the party’s spokeswoman, said.