After derailing and chaos, KTX back on schedule

After derailing and chaos, KTX back on schedule 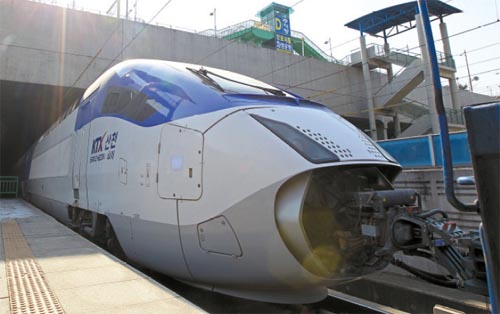 The derailed KTX train is pulled on Saturday afternoon from the tunnel where it went off the tracks near Gwangmyeong Station. [YONHAP]


All KTX trains traveling between Seoul and Daejeon resumed normal schedules starting 8:00 p.m. Saturday, 31 hours after a Seoul-bound train from Busan derailed on Friday, throwing the KTX network into disarray.

But Korea Railroad Corp. said yesterday that it was still investigating the cause of the derailment.

At 1:05 p.m. Friday, six out of 10 cars on the train derailed right after it entered Iljin tunnel, only 500 meters (0.3 miles) away from Gwangmyeong Station, Gyeonggi.

The six cars suddenly stopped and tilted about 15 degrees to the left, causing passengers inside the cars to scream and try to evacuate, according to the passengers.

“Before arriving at Gwangmyeong Station, the train suddenly rattled over the rail and stopped with thumping sounds,” a passenger surnamed Hwang said.

Immediately after the derailing, attendants manually opened the cars’ doors and evacuated all 149 passengers to Gwangmyeong Station through the dark tunnel. There were no casualties but a 63-year-old woman surnamed Park complained of back pain and was taken to Gwangmyeong Sungae Hospital.

According to Korail, the train was in the process of switching to another track in the tunnel, but its fifth car derailed, along with the five other cars behind it.

After the accident, all KTX trains traveling between Seoul and Daejeon were forced to travel on ordinary track and at slow speeds, delaying non-high speed trains such as the Mugunghwa or Saemaul.

The state-run rail corporation finished moving the derailed cars from the tunnel at 2:20 p.m. Saturday and finished repairs on signal devices and tracks. At 7:00 p.m., Korail announced that KTX routes between Seoul and Daejeon were back to normal.

“As the height of the tunnel is low and some devices were built on the inside of the tunnel, it took a long time for us to drag the derailed train out,” an official for Korail said.

Train stations were crowded with stranded passengers and people asking for refunds. According to Korail, refunds for Friday tickets are estimated to be 1 billion won ($887,784). Total refunds will be more than 2 billion won, Korail said.

This is the first derailing since Korail began operating KTX in 2004.

“We are assuming that there were problems in the track switching system, not in the tracks themselves,” said Kim Heung-seong, Korail spokesperson. “But the exact reason of the accident should be verified by the railroad inspection committee [of the Ministry of Land, Transport and Maritime Affairs].”