Gangwon buried in most snow in a century

Gangwon buried in most snow in a century 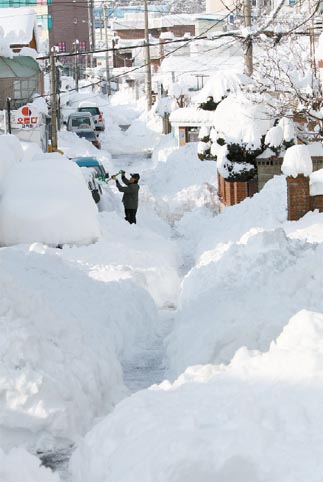 A resident shovels snow to clear a passage yesterday in a residential area of Gangneung, Gangwon. Heavy snowfall inundated the region over the weekend. [YONHAP]

The biggest snowfall in 100 years in Gangwon paralyzed coastal cities and mountain villages near the East Sea, isolating about 1,280 residents in 640 households and leading to the collapse of 75 structures. The local military office sent 11 helicopters and roughly 12,000 soldiers on rescue operations.

And more snow was predicted for the region overnight, up to 50 additional centimeters (19.7 inches), by the Korea Meteorological Administration yesterday. The administration issued heavy snow warnings to most cities and villages in the province.

“As the temperature will plunge tonight, leading to icy roads in the morning, drivers and pedestrians should take special cautions,” the state-run weather agency said. “We advise residents to prepare for additional snowfall and to prevent their roofs or structures from collapsing.”

Snow began falling on Friday and stopped at about 5:00 p.m. on Saturday. Gangneung saw 77.7 centimeters of snow on Friday, the heaviest since the city began weather observations in 1911. Samcheok was hit with 120 centimeters of snow, Donghae 100.1 centimers, and Daegwallyeong 56.3 centimeters, according to the KMA.

“I couldn’t open the front door of my house because piles of snow blocked it,” said Hong Jong-won, a 62-year-old resident of Gangneung. “I had to push away snow piles as if I were wading in water just to reach the shovel, which was 10 meters away from the front door.”

The Gangwon provincial government’s Disaster and Safety Management Office said yesterday that 67 greenhouses, seven livestock facilities and one warehouse collapsed from the weight of accumulated snow on their roofs.

Roughly 4.5 billion won ($4 million) worth of damage was estimated, the office said.

The ROK Eighth Corps, deployed near the east coast, sent 11 helicopters to Donghae, Gangwon. The helicopters flew over snow-inundated regions and communicated with soldiers on the ground, who delivered necessities to isolated residents. Some helicopters dropped soldiers on ropes to deliver relief supplies or give medical support to the cut-off houses.

The corps also sent 57 snowplows and 330 other equipment to clear snow from roads.

Soldiers rescued about 450 vehicles stuck in thigh-high snow on highways since Friday.

On highway No. 7, connecting Imwon-ri and Hosan-ri in Samcheock, a 26-ton tanker truck skidded on an icy road and blocked the two-lane highway. About 300 people in 100 cars were stuck on the road for 34 hours until 5:00 a.m. on Saturday when enough snow was cleared. Local officials said the drivers were stranded without water or food until policemen arrived with bread and drinks early Saturday.

At 9:00 p.m. on Friday, an express bus skidded on the highway near Sonyang-myeon, Sokcho, trapping some 150 vehicles for seven hours.

According to the local government, about 400 local buses running 293 routes in the province were suspended or ran limited routes.

In order to remove the snow on the roads and expressways, the Gangwon provincial government dispatched 1,560 plows, 5,400 workers and 2,000 policemen to scatter salt and control traffic. “The northeastern wind, created by the low pressure in southwest, brought the snow clouds to the East Sea,” an official at the Korea Meteorological Administration said yesterday.